On August 27th, 2012, the Bad Piggies made their own Facebook and Twitter accounts and started teasing the readers that they have plans to soon reveal something. On August 30th, Rovio posted a video on their YouTube featuring Red on a featureless white background, with pigs falling on top of him and the supertitle "Something PIG is coming" appearing on the screen. After eight days of secrecy, on September 4th, Rovio unveiled it: a new game in which the pigs are the stars. On September 17th, Yahoo! Games has revealed the gameplay for the game.

The main point is that the player builds vehicles (cars, planes, etc.) out of various materials (wood, metal, etc.) and puts Ross to ride them and tries to collect things such as stars. The following day, the TV show X-Play made a preview of the game showing more of the game. On September 27th, the game was released on iOS, Android, and Macintosh, with PC releasing later the same day.

The plot revolves around Ross, Mechanic Pig, and King Pig finding pieces of a map that could lead them to the eggs.

The plot revolves around Ross, Mechanic Pig, and King Pig finding pieces of a plan to retrieve the eggs, after the eggs have been moved, rendering the original map invalid.

Flight in the Night

The plot revolves around Ross finally stealing an egg from the sleeping birds, much to Mechanic Pig and King Pig's delight.

This episode has 30 levels, the fewest of all main episodes.

The plot revolves around Ross enjoying the Halloween season and introduces the non-playable character Major Lazer.

The Road to El Porkado

The plot revolves around Ross finding a legendary golden statue hidden in the city of El Porkado. It is based on the myth of the legendary city of El Dorado (or Manoa), a city of gold supposedly hidden in Peru.

This episode is split into 10 parts.

It does not have a plot. instead, you need to collect 20-star boxes to proceed to the next part.

The largest sandbox level, not having a plot, it needs to be bought using real money and can also be used as a testing ground for custom vehicles. It has 40 star-boxes. It is also as big as two sandbox levels and is extremely tall. Collecting more star-boxes collects more parts too.

The second-largest sandbox level, not having a plot, it does not need to be bought using real money and can also be used as a testing ground for custom vehicles. It has 40 star-boxes. You can make up to three vehicles at the same time but only one can be used to collect star boxes. Collecting more star-boxes collects more parts too.

This is a sandbox that can be unlocked by finding 10 skulls that are hidden across the game.

This is a sandbox that can be unlocked by finding 10 statues, which are hidden in the episode The Road to El Porkado.

This episode has 8 levels. It involves competition with an opponent.

It does not have a plot. Instead, the levels have leaderboards in which you compete to get first prize.

This is a separate game mode involving competition with an opponent.

It happens in real-time. You also collect loot crates for winning. They can be opened after a certain time.

You can collect multiple cakes while playing the levels of the game that can be fed to King Pig in order to collect Power-Ups, Coins, XP, and Scrap.

In Bad Piggies, the player is tasked with creating a vehicle that will bring Ross to the goal for every level, except the Sandbox and Field of Dreams levels. However, the player is given a limited amount of resources, in the form of parts, for the player to do so; The parts can do many things that could affect the vehicle's performance such as soda bottles and firework rockets as boosters, fans, and rotors to provide propulsion and even TNT crates, etc. These parts are to be assembled in a form of 'build grid' and the player cannot start without putting Ross anywhere, after which they may start the attempt.

Physics apply to the vehicle (weight, force, and aerodynamics) which the player may compensate or use to benefit the chances of getting to the goal, whilsh operating the various parts to get to it. For example, lighter parts like wood will have a lightweight construction meaning faster speed, more aerodynamics and able to achieve in less time. However, due to the weakness in strength, the material itself will be vulnerable to damage. Likewise, heavier parts will have a sturdier construction, but are heavier in weight resulting in them being less prone to damage, having less aerodynamics, more grip, and better holding into the surface. However, this results in a slower speed due to the impacted weight of the material.

The level is graded in stars, much like the other Angry Birds games but, instead of grading the player's performance, they are gained by achieving secondary objectives like obtaining a Star Box, completing a level without using a part, possibly trying not to break the vehicle, or getting to the objective under par time (two par times in the Road Hogs levels). The player is rewarded the stars once the goal has been reached.

They can also be completed in multiple runs - example: the player can collect two stars (one for the initial goal, one for getting a Star Box, as an example), and then collect the other star (e.g. not breaking the vehicle), without collecting one of the already collected stars. This can be useful in difficult levels where three stars cannot be scored at once.

Sometimes, the player may come across the birds, who are initially sleeping. The player can sneak by without using noisy parts: (e.g. engines, crashing, propellers, rockets, soda bottles, etc.) otherwise the birds may wake up, mount their slingshot and attack Ross, using their abilities as well.

There are the resources in Bad Piggies:

Snout Coins are the resources to buy in-game content:

They can be earned by doing these:

EXP (Experience Points) is a feature in Bad Piggies that can be used to earn rewards (Wheel of Fortune) when the player level up. They can be earned by Playing levels and earning stars (20 XP each star), Winning Cake Race mode (100 XP), in Dessert Mode (2 XP each King Pig burps for coins, nuts, or power-ups), using new custom parts (depending on type of common (1-star), rare (2-star), or epic (3-star) parts), craft new custom parts, and getting hidden loot crates (the rarer the crates, the bigger XP earned.)

Scrap is the in-game resources that can be used to craft new custom parts.

They can be earned by feeding King Pig in Dessert Mode or in the Hidden Loot Crates.

Secret items, or secret custom parts, can be found throughout the game. There are 3 known secret items.

There probably might be a hidden 2-star item but none have been seen yet. 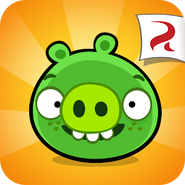 Bad Piggies 2 is an upcoming game by Rovio Entertainment and the sequel to Bad Piggies. The game was announced through ads on TikTok and if you click on one of the ads, it will take you to a GeekLab store page and if you click "install" you will be given a survey about the game and if you think it should be made. Three different advertisements for the game exist. One with the classic design, one with the toons design and one with the movie design. The game may not get created.