A Pig's Best Friend is the thirty-eighth episode of Angry Birds Toons.

The Minion Pigs offer a captured Blue Bird to King Pig as a pet. Against all odds, it's really fun for the Blue Bird and he ends up driving King Pig crazy!

At the King's Palace, because King Pig wants to own his new, loving pet, the Minion Pigs prepare a surprise for him, a caged Blue Bird (Jim), that suddenly frightens King Pig because of his angry face and constant struggle to get out of the cage. When the Minion Pigs see him taking care of Jim, they say goodbye to him and walk away from the palace.

While King Pig's getting something in the cabinet, Jay and Jake stare at the window planning to make Jim escape from being caged. Jim disagrees and tells them he has a plan. King Pig returns with a pet holder. He sees Jim's eyes  shimmering and glowing and his pupils enlarging to make sure that King Pig felt that he's pitiful. King Pig ties Jim the pet holder, but Jim gets hold of it and pulls King Pig numerous times, hitting him with the cage.

Minion pig guards arrive to see the commotion. Again, Jim's eyes shimmer to prove that he's pitiful, and the pigs walked away from the palace. His plan works, as Jay and Jake laugh.

Outside the King's Palace, at the staircase located at the beautiful gardens, King Pig goes down with Jim tied in the pet holder. Jim fetches a bone that King Pig threw. But Jim hits King Pig's his head with the bone. Then, he buries him with a pile of soil. When Jim sees a butterfly, he gets distracted by it and rans after it while King Pig holds firmly to it. He bumps from the stairs going down the staircase and Jim smashes him through the water fountain.

The guards see King Pig, but King Pig hops excitedly with no other reason, while Jim also hops around him as the guards leave. Jim proceeds to pull King Pig through the bushes, and the beehive, where King Pig get stung by tons of bees. Afterwards, Jim ties him again with the rope around a stone statue. The other two Blues come laughing, spitting their tongue together with Jim to him, and walk away together, with Jim saying a last "Goodbye."

At the tall, spacious cliff, King Pig is sitting on a swing, already missing Jim and crying because he had a fun time with him. When guards come in, watching King Pig, he suddenly gets an idea.

Back again at the gardens, King Pig has now three pets. Not birds, but Minion Pigs. Some Minion Pigs act and pretend to be a pet dog, cat, frog, and a rabbit with their assigned costumes. Foreman Pig also joins in and wears a female dog costume, carrying a bone.

At the end of the episode, he became happy that he has three pets, not only one. He looks at the camera, breaking the 4th wall.

Cast (in order of appearance) 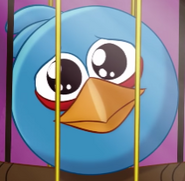 Jay who appears in this episode