Male
The Alien Pig is a pig with three eyes, one above his nose, appearing only in Angry Birds Space. He drives a spaceship and can be seen in Cosmic Crystals Level 30. He ejects crystal planets, and a beam of light that also sucks up objects.

He is an oval-shaped pig (just like King Pig), with three eyes, the middle one above the snout and the other two on the sides of it, his snout is lime green with two unproportional nostrils: the left one is bigger than the right one. There are also sharp fangs below the snout. 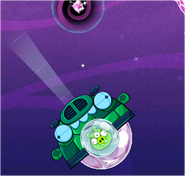