Andrew is a bird in Angry Birds Evolution that can be obtained at any time.

Andrew has finally plucked up the courage to start internet dating in the hope of finding the next “one”.

The last “ones” have formed a support group.

He is a tall blue pelican with a a triangular fat belly, long orange beak with a large jaw, his feet are also orange, red pupils, he also has two bushy dark blue eyebrows, dark spots on his back, dark blue hair divided into left and right and two feathers on the back, and a dark blue tail with various feathers.

The belly has a tanktop marking, that is light blue, due to the sun.

The irises' color is red, which can be hardly noticed, because of the eyebrows, which make shadow, darkening them. They are small, like the eyes, which are a bit bigger.

He had three squareish bottom teeth shown on both sides of the beak.

Attack with two additional images for 92 damage. Each enemy hit drops a small amount of coins.

Attack with two additional images for 119 damage. Each enemy hit drops a small amount of coins. 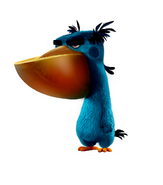