Android is an operating system based on Linux,[1] designed for smartphones and tablets mostly those by Google and Samsung but also used on other phones and tablets from other companies. It is considered by people to be a competitor to iOS/iPhoneOS.

Most games from the Angry Birds series can be played on Android by either downloading them from stores or by downloading APKs (XAPKs for some games which are bigger) from websites or unofficial app stores not by official companies.

This is a list of the Angry Birds games on Android and their system requirements.

"The Lazer Bird, introduced by Samsung, perfectly reflects the personality of Samsung's GALAXY Note. The bird's lazer vision resembles the best viewing experience on the crisp and expansive screen and its Lazer strike superpower the high performance.

New characters, including the Lazer Bird in Angry Birds Space, have unique superhero powers to help in their fight against the space pigs and bring their eggs safely back home." 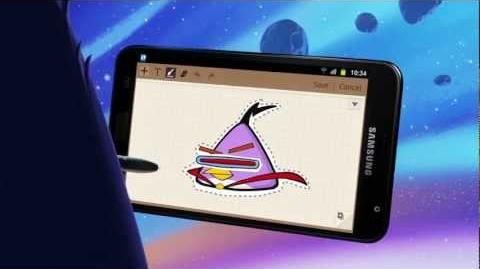