The Angromedon is an Angry Birds Evolution bird that could be obtained only in The Valentine's Day The Earth Stood Still Event and now can be obtained in other events.

Created by the sinister Dr. Probotnik, this “augmented romance suit” was discarded after trial runs in various hug-related accidents until an innocent hatchling discovered it and climbed in. The romance protocols activated (along with the pneumoniatic crusher arms) and the Angromedon lives... again!

The Angromedon is a robot with a blue fat metal torso with a red light on the bottom of it and two metal feet. There's a dark green computer screen with a square metal frame nailed by 4 corks that displays the message Starting Y-DOS... 0:\>>_   in white and the screen is in the middle of the torso.  There are two metal feathers in the back of the torso.

There are two metal circles in each shoulder that involve large metal tube-arms with crusher claws.

On top of the torso, there is a large glass dome with two blue lights as eyes, there is a metal bumper on the front of it that resembles teeth, inside of it, there is a control pad with various buttons and console. Jay sits inside it.

There are now two front red lights on each side of the torso. The computer screen that is in the middle of them now displays a pong game being played. There are two blue pads with light blue lights on each arm. There is a now an antenna on top of the glass dome and a battery in the back of the machine with two red antennas and two lights. Jay is now angry.

There is now a red ring with two layers on the torso that involves the computer screen in which the frame has red corners and displays the blue animated word Tilt in an explosion in which the background is completely black. Above the ring, there are two red lights in a completely polished dark blue part. The red light on the bottom is absent.

The shoulders are now bigger, with a dark blue color and with a red light each. The left claw is now a red laser dark blue cannon with metal plates and the right claw has no metal plates. There are dark blue wings with red bottoms and a red center in the back of the machine.

There is now a dark blue part with red horns on the top of the dome and there's a blue part involving the bumper. Jay now wears a dark blue bat hat with red goggles and black pants with a suspender.

The frame of the computer is now red with a small blue light on top of it and the screen now displays an animated red A in a circle being drawn with red dots. The top of the torso is now dark blue with a red part on each side and a metal bottom. The shoulder is now dark blue with dots and involved with a white part. There are pads with the same pattern on each arm, which is now silver and the claws are also silver.

There is now a blue and red Mohican with two lightning symbols on each side, which the Mohican is held with red support. The lights in the dome now have red pupils and eyelashes and the bumper is now showing a happy smile. Jay has now red face paint on his face.

Attack with two additional mirror images for 226 damage. Hit enemies are tagged to receive 20% damage from blue birds next turn.

Attack with two additional mirror images for 722 damage. Hit enemies are tagged to receive 20% damage from blue birds next turn.

Attack with two additional mirror images for 754 damage and create a maelstrom at the first impact.

Increases both health and damage by 10%! 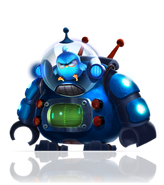 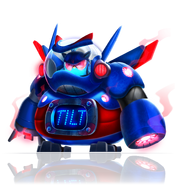 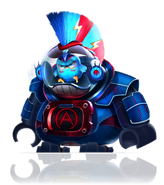 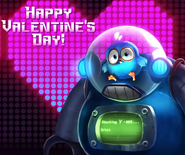