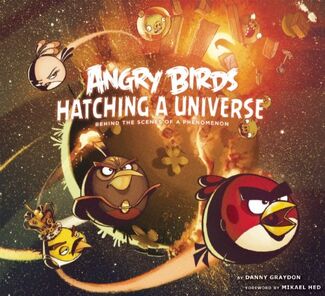 Angry Birds: Hatching a Universe is a documentary on the Angry Birds franchise, released by Titan Books on May 24, 2013, and by Insight Editions on June 4, 2013. It is written by Danny Graydon (with a foreword by Mikael Hed).

In 2009 little-known Finnish video game company Rovio Entertainment wowed the world when it unleashed an unlikely gaming phenomenon: Angry Birds. Ingeniously simple and highly addictive, the game’s initial success led to a number of bestselling sequels and in 2012 the franchise reached a staggering landmark with its one billionth Angry Birds download. For the first time, this stunning coffee table book goes behind the scenes of Rovio’s success to deliver in-depth insight into the remarkable artistry that goes into creating each Angry Birds game. Featuring exclusive conceptual artwork and revealing interviews with the game’s creators, Angry Birds: Hatching a Universe is a must-read for fans.

Angry Birds: Hatching a Universe will take an in-depth look at a number of exciting and sometimes offbeat aspects of the Angry Birds world from its impact on popular culture, to its expansion into other mediums such as animation, and even the Angry Birds-influenced design of Rovio’s offices! Delving into the creation of hits like Angry Birds Space and featuring sneak peeks at upcoming titles, the book will offer a revealing glimpse at all aspects of the Angry Birds universe. Also featuring an exclusive preview of what the future holds for the franchise as Angry Birds expands beyond its origins as an app, this is the ultimate look at not only one of the most popular video games of all time, but a rich multimedia world that is continually expanding.

Retrieved from "https://angrybirds.fandom.com/wiki/Angry_Birds:_Hatching_a_Universe?oldid=291443"
Community content is available under CC-BY-SA unless otherwise noted.