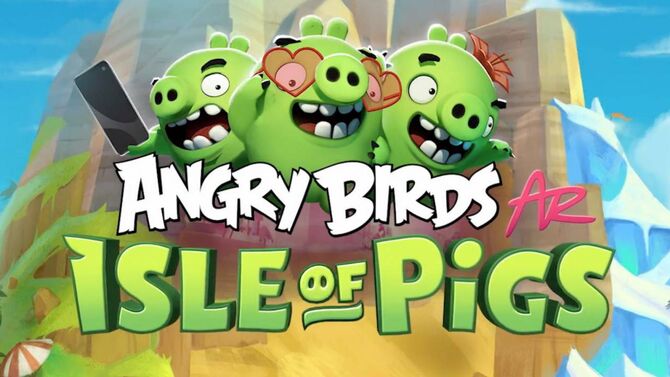 Angry Birds: Isle of Pigs[note 1] (originally called "Angry Birds: First Persons Slingshot" for the MagicLeap One Creators Edition),[4] is a 3D puzzle video game that is a part of the Angry Birds series. It was developed by Resolution Games during late 2018 and published by Rovio Entertainment in early 2019.

Trying to emulate the gameplay mechanics of the earliest Angry Birds video games, Angry Birds: Isle of Pigs is a puzzle video game with a 3D perspective. As with past Angry Birds games with similar gameplay, the main objective of the game is to pop all the Minion Pigs in the levels by launching a set of birds using a slingshot. These Minion Pigs are found inside of structures made of glass, wood and/or stone. On the other side, the player will have a maximum of three birds to launch. There are four different playable birds in the game, each with their own abilities. If the player fails to pop all the pigs in the level, they will get a Level Failed screen, encouraging them to try again. If they manage to do so however, they will pass the level and get one, two or three stars depending on the score received.

While gameplay is similar to that from past games, the player now is in a first person 3D perspective. In the VR version of the game, they will be holding the slingshot with one hand, while they will be able to aim and launch the birds with the other hand. In this version, the player can also select different spots to stand on and have different angles to launch their birds. On the other side, the AR version of the game has the camera located whenever the player is on in real life. This means that here, the player can move their phone to one place or another to change their position in-game.

In December of 2019, a new "Level Builder" mode was added to the VR version that allowed you to build and test your own levels. In July of 2020, a new feature was added that allowed players to share their levels with other players through the game's online connectivity feature.[5]

Scott Hayden from Road to VR gave the PC version of Angry Birds VR: Isle of Pigs a positive rating of 8.5, writing that "Angry Birds VR’s bright & lovable cartoony world is even better in VR than I’d hoped, injecting you straight into a well-realized environment that seems, for the lack of a better word, flawless. The game’s cutesy soundtrack plays throughout, and never seems to grow old either even after powering through the game in one sitting".[9] Similary, Felix Wong at COGconnected rated the same version of the game 85, saying that "Angry Birds: Isle of Pigs recognizes the appeal of its predecessor and delivers physics-based puzzles in spades. There are no gimmicks here, just good old bird-flinging fun. Isle of Pigs may not reinvent or reinvigorate the franchise, but it shows that Angry Birds certainly has a home on VR. If Rovio goes on to release as many sequels and spin-offs on VR as they have on mobile, well, that may not be a bad thing after all". However, he also recognized that the game was "too short".[10] Peter Graham from VR Focus gave the game four stars out of five, and wrote that "Rovio Entertainment and Resolution Games have certainly played it safe with Angry Birds VR: Isle of Pigs. While there aren’t really any major surprises when it comes to content and gameplay the adaption to VR has worked superbly well, with the studios retaining the high production values they’re known for. Angry Birds VR: Isle of Pigs is Angry Birds just in VR, and that’s no bad thing, equally fun and frustrating as it ever was".[11]

Reviewing the AR version of Angry Birds: Isle of Pigs, Tommaso Pugliese at Multiplayer.it wrote that "Angry Birds AR: Isle of Pigs represents a successful attempt to refresh the formula of the Rovio series, re-proposing the classic mechanics but with a captivating twist: the use of augmented reality, which allows you to place the structures of the pigs on a flat surface, creating a real three-dimensional diorama to interact with". In conclusion, it rated the game 8.0 out of 10.[12] However, Sam Simmons at GameZebo was a bit more negative, and mocked the game writing "I like this game, I think it’s a fresh twist on a stale franchise which is nearing the end of its lifetime. With that being said, I feel like there is a future for this game as a party trick. Something cool to show your cousins for five minutes before it bores you and play something else".[13]