Angry Birds: Treasure Island is a 160 page book by Cavan Scott released on September 25, 2014 and is a parody of the Robert Louis Stevenson classic, Treasure Island.

Jay, Jim, and Jake Hawkins long to be sailors and spend their days listening to old Billy Beak's tales of the high seas. So when they discover Billy Beak's long-hidden treasure map, they immediately set sail accompanied by a crew of suspiciously green pirate birds, led by a cook called Long John Smooth Cheeks . . . Can the Hawkinses find the fabled Easter Egg Island, and can they trust their new pirate shipmates? Find out in this epic, swashbuckling adventure based on Robert Louis Stevenson's original story. 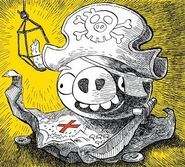 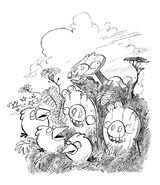