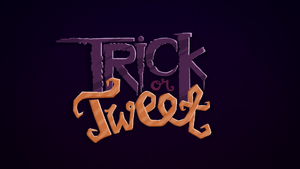 Angry Birds "Trick or Tweet" is a trailer promoting the release of Haunted Hogs on October 6, 2012.

The Blue Birds are trick or treating head towards a spooky house. They knock on the door, only to be frightened by the homeowner and leave, dropping their collected candy. The homeowner then takes all of the candy after the Blues flee. The homeowner does this several times to others, including Yellow Bird (Chuck), White Bird (Matilda), Black Bird (Bomb) and Red Bird (Red), scaring them and stealing their candy, which they all dropped. Bomb comically exploded continuously while running away, revealing that being scared also triggers Bomb's explosive behavior. After a while, the homeowner is revealed to be the Orange Bird (Bubbles) in a Porkenstein outfit. Bubbles gaze at his large collection of candy and start to eat some of it. He is then interrupted by a loud knock on the door. Bubbles put back on his pig outfit and opens the door. At the doorstep is everyone who has been scared by Bubbles, which they are angry, implying that they found out about Bubbles' prank. Big Brother Bird (Terence) is also present, and says "Trick or Treat" in a low, dull voice as the door opens. The scene then ends in ambiguity.

Retrieved from "https://angrybirds.fandom.com/wiki/Angry_Birds_%22Trick_or_Tweet%22?oldid=238245"
Community content is available under CC-BY-SA unless otherwise noted.