In the animated short film, Red, Jay, and Chuck happily stare at The Eggs. Then, a butterfly accidentally knocks over an egg, angering the birds, thus distracting them. The Bad Piggies then took the opportunity to steal the eggs.

The birds then go after the Bad Piggies to defend their eggs, in the process of destroying several small pig forts, then the pigs were eventually forced to retreat into a large steel fortified base invulnerable to the bird's effort.

Suddenly, Chuck pulled out a can of Sardines as an idea to get help from the Mighty Eagle. Then, Red, in fear, went to the cave where Mighty Eagle dwells and asked for assistance while offering the sardines. Mighty Eagle then looks at the can and accepts the deal.

The Chef Pig came out of the base, later on, scouting. He was suddenly knocked on the head by the sardine can. He looked around, saw the can of sardines, and the shadow of the eagle appears. The chef panics, squeals, runs inside, takes the eggs out of the fortress, and waves a white flag, indicating a surrender, but unfortunately for him, he got crushed by the Mighty Eagle. The eggs were finally safe and retrieved to the birds.

At the end of the video, Mighty Eagle reveals himself all black in front of the camera making a loud noise in his jumpscare and the scary music makes the video end. 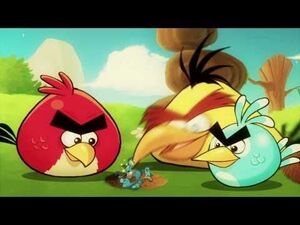