This article is about the video game franchise. For other uses, see Angry Birds.

Angry Birds is a Finnish video game franchise created and owned by company Rovio Entertainment. Inspired by the Flash game Crush the Castle, the franchise started in late 2009 with the release of Angry Birds for iOS, and later for Android and Symbian devices. Its unexpected success saved Rovio from bankrupcy, and predicted the release of many other video games, most of them produced by Rovio themselves, to this day.

Angry Birds stars a flock of exceptionally rare[1][2] birds- the Angry Birds- inhabiting Piggy Island. Their main task is to protect the three[note 1] eggs from the Piggy kingdom, a monarchy of green-colored pigs, governed by King Pig Smooth Cheeks.

The Angry Birds franchise has been incredibly successful since the release of the original Angry Birds; in early 2018, the series had a combined tally of over four billion downloads (over one billion of them being from the original game alone[3]) across all platforms.[4] The success of the first game led to the production of more games, alongside shows, comics, and films.

The main Angry Birds series takes place on earth, a fictious representation of the planet of the same name. The earliest backstory for the franchise takes place on the fictional Piggy Island, where a flock of rare birds, known as the Angry Birds, protect three eggs. The Angry Birds (specially their de facto leader, Red) take their duty very seriously, as they think that those eggs will eventually hatch and bring peace to the island.[1] However, their eggs are constantly stolen by the Piggy kingdom, a political faction composed on pigs, whose monarch, King Pig Smooth Cheeks, seeks to eat them due to the ancient laws that force all monarchs to eat eggs at least one time in their life.[5] To retrieve their eggs back, the Angry Birds use a slingshot to be launched and destroy the pigs' buildings.

The Angry Birds Movie, a film released in 2016, expanded the lore of the franchise. Now taking place on Bird Island, a society of birds lived peacefully following a series of rules, one of them prohibiting them from getting angry. One of the members of said society, Red, who was a hostile, short-tempered bird, was eventually forced by law to attend Matilda's anger management classes after an incident involving a birthday party. There, he met Chuck, Bomb, and Terence, with him ignoring them. Eventually, Bird Island was visited by society of pigs from Piggy Island, claiming themselves to be innocent and solidary people who wanted to stay on Bird Island. The birds society accepted their stay and quickly gained their trust. However, Red remained skeptical about the pigs and their leader, Leonard. Inspired by the heroism of the retired Mighty Eagle, he, Chuck and Bomb went for his help, only for the eagle to refuse, dissappointing Red. Then, the birds discovered that the pigs were distracting the other birds with a party while they stole all the eggs and bombed the island. The next day, Red led the birds to Piggy Island, where they managed to destroy Pig City, the home city of the pigs, and get the eggs back.

Most of the earliest Angry Birds games followed a fairly basic, casual, puzzle-styled gameplay, with the player having a small set of birds to launch with a slingshot to destroy the buildings in the levels and pop all the pigs inside. To launch the birds, the player has to drag their finger onto the bird on the slingshot and move it to aim. Releasing the finger would result in the bird being launched, and the next bird would hop onto the slingshot, waiting for them to get launched. The birds have different abilities, and some might be effective at destroying certain materials than the others. If the player runs out of birds without popping all the pigs in the level, they will get a "Level Failed" screen showing a pig laughing at them. On the other side, managing to pop all the pigs would result in the player completing the level, getting a bonus score of 10.000 for each unlaunched bird. Then, they will pass to the result screen, getting one, two, or three stars depending on the score received. They wil also be given the option to pass to the next level, go to the main menu, or restart the level. Most of these games also got limited Power-Ups as time progressed. These Power-Ups gave the player an advantage to complete the levels with more ease should they get stuck.

In early 2009, the staff of the broke company Rovio Entertainment Corporation began reviewing proposals for potential games. One such proposal came from senior game designer Jaakko Iisalo in the form of a simulated screenshot featuring some angry-looking birds with no visible legs or wings called "Birds!". While the picture gave no clue as to what type of game was being played, the staff liked the characters, and the team elected to design a game around them. In early 2009, physics games, such as Crush the Castle, were popular flash-based web games, so the Rovio team was inspired by these games. During the development of Angry Birds, the staff realized the birds needed an enemy. At the time, the "swine flu" epidemic was in the news, so the staff made the birds' enemies pigs. Angry Birds was the studio's 52nd produced game and on its initial release, the game didn't sell many copies. After Angry Birds was a featured app on the UK App Store in February 2010 and quickly reached No.1 there, it reached the No. 1 spot on the paid apps chart in the US App Store in the middle of 2010 and then stayed there for 275 days. The initial cost to develop Angry Birds was estimated to exceed €100,000 ($113,724.90), not including costs for the subsequent updates. For the iOS version, Rovio partnered with distributor Chillingo to publish the game to the App Store. Chillingo claimed to have participated in final game polishing, such as adding visible trajectory lines, pinch to zoom, pigs' grunts, birds' somersaults on landing. Since then Rovio has self-published almost all of the later ports of the game, with the exception of the PSP version, which was produced under license by Abstraction Games.

When Rovio began writing new versions of the game for other devices, new issues came to light. As the team began working on a version for Android systems, they observed a large number of configurations of device types and versions of the Android software. The number of combinations of software versions, processor speed, and even user interfaces was significantly larger than that for the iOS version. Ultimately, the team settled on a minimum set of requirements, even though that left nearly 30 types of Android phones unable to run the game, including some newly released phones. It was released on October 15, 2010. One month after the initial release on Android, Rovio Entertainment began designing a lite version of the game for these other devices.

In early 2010, Rovio began developing a version of Angry Birds for Facebook. The project became one of the company's largest, with development taking over a year. The company understood the challenges of transplanting a game concept between social platforms and mobile/gaming systems. In a March 2011 interview, Rovio's Peter Vesterbacka said, "you can’t take an experience that works in one environment and one ecosystem and force-feed it onto another. It's like Zynga. They can’t just take FarmVille and throw it on mobile and see what sticks. The titles that have been successful for them on mobile are the ones they’ve built from the ground up for the platform." The Facebook version incorporates social-gaming concepts and in-game purchases and entered beta-testing in April 2011; the game became officially available on Facebook in February 2012.

Rovio is investigating ways to expand the Angry Birds brand, including merchandise, television shows, and movies. Mikael Hed, CEO of Rovio Mobile, has envisioned a feature film in the stop-motion animation style of Aardman Animations. To that end, Rovio has purchased a Helsinki-based animation studio to prepare Angry Birds short cartoons on the Nicktoons station's Nickelodeon Extra, the first of which was a Christmas special named "Wreck the Halls" that debuted in December 2011. Hed acknowledges that such a film would be years away and that Rovio must keep the characters relevant until then, by producing sequels or new ports of the original game.

On April 11, 2014, Rovio released Piggy Tales, a stop motion animated series. It tells the stories of the Minion Pigs' life.

On November 1, 2014, Rovio released Angry Birds Stella, a 2D/3D animated series based on the game of the same name, telling the stories of Stella's life and that of her friends on their own island.

On March 10, 2017, Rovio released Angry Birds Blues, a computer-animated series based on The Angry Birds Movie. It shows the lives of the Blues having fun, while the Hatchlings do random stuff and ruin their plans.

On November 17, 2018, Angry Birds on the Run was released. The series was released on YouTube.

A 3D computer-animated film adaptation, The Angry Birds Movie, was released on May 20, 2016, which fully anthropomorphizes the characters for the first time in franchise history, giving them limbs and voices.

Angry Birds has been adapted into a lot of comics, see them here.

Angry Birds has its own cookbook, named Bad Piggies' Egg Recipes. Unlike the game, which focused on the birds, the cookbook focuses on the pigs and the dishes they could make using the eggs. 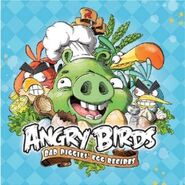 In May 2011, Mattel released an Angry Birds board game, entitled "Angry Birds: Knock on Wood". Multiple sequels followed soon after.

In Spring 2012, Olvi started to manufacture Angry Birds soft drinks, after making a deal with Rovio. At first, there came two different tastes:

In November 2013, Indian brand Parle started a marketing campaign in which a trading card is included in each packet of Parle's Wafers and it included a related contest to win Angry Birds merchandise.