Angry Birds Wiki
Register
Don't have an account?
Sign In
Advertisement
in: Pages with Sensitive Material, Others

Being a famous and long-running franchise, Angry Birds is no stranger to controversy. This page contains a list of controversies relating to the series.

Back in 2012 when Angry Birds was getting global and media attention, people started to realize that the gameplay was very similar to another mobile game that came out in April 2009 called "Crush the Castle", which was themed to a more medieval landscape with Kings and knights being in the Pig's perspective and cannon balls filling in for The Birds. There was a decent amount of backlash on Rovio for copying CTC, but on May 6th, 2015, the creator of Crush The Castle, Joey Betz did a Reddit AMA about the game and when someone asked about how they felt about Angry Birds, the OP stated that he thought it was a rip off, but he was later flattered when Angry Birds took off. He states that "When it started growing in popularity it's become kind of flattering really" and "If that's true, then it's awfully flattering that they chose my game to ''copy''. :P".

Did Angry Birds Steal From Crush The Castle??
Video

NSA and GCHQ using Angry Birds to spy on players (2014)

Around 2014, documents were leaked by former NSA contractor Edward Snowden that said the NSA (National Security Agency) and its British counterpart the GCHQ (Government Communications Headquarters) were spying through security-venerable apps like Angry Birds to monitor social media presence and what you do on your phone. Both agencies stated that they operate within all reverent laws and only peruse valid foreign intelligence targets.

On August 4th of 2014, a Seattle artist filed a lawsuit against Hartz for cheating her out of millions of dollars when the pet toy company, Hartz Mountain Corporation made a deal with Rovio Entertainment to bring their popular Angry Birds brand to their toyline. Juli Adams designed the "Angry Birds" line of cat toys in 2006 when showing her artwork at a festival in Montana in 2006 when a vacationing Hartz executive saw her work and asked if Adams would be interested in designing a line of pet toys for the company. She accepted and helped create the cat toy line. When Rovio partnered with with Hartz in 2009, Hartz stopped the manufacturing of the original Angry Birds line and went on to make both dog and cat toys of the brand we know of today. The lawsuit was filed in 2014 and trials began shortly. Hartz asked U.S. District Judge Robert Lasnik to dismiss the case, arguing that under its contract with Adams, it owned the “Angry Birds” trademark and was free to use it, but Lasnik declined to do so. The case was settled on December 28, 2015, with the results of the case being confidential to this day, but what we know is that Juli's attorney, Tony Shapiro sad that "She is very happy with the results".

Results of the case

In May 2016, when The Angry Birds Movie was released to the public, people were questioning the movie's theming throughout the feature film. Mainly to the recent issues Germany was facing with Islamic refugees during the start of the 2010's in Europe. There have been many conspiracies, like Bird Island from above looks like the European Union (EU) flag and the “Anger management lesson” represents the liberalism in Europe. Issues covered in the film include:

Rovio likely realized what people were thinking, so they revamped their scripts for the Angry Birds Movie 2 and it got a higher rating than the first movie, probably due to the more interesting plot of the Birds and Pigs teaming up to take down the Eagles.

On June 20, 2019, Rovio filed a lawsuit which accuses Angry Birdz Nashville Hot Chicken located in California of trademark dilution both with its name and its logo, which appears very similar to the logo for Angry Birds the mobile game. Rovio alleges that the restaurants’ infringement will impair the distinctiveness of Rovio’s Angry Birds marks, which caused Rovio to issue a cease-and-desist to Mkhitaryan (the owner of the restaurant) and Angry Birdz. At that time, Rovio seeked a prohibition against the hot chicken restaurant from using the name or logo in the future, as well as unspecified damages. The business is believed to be rebranded to "Angry Chickz". 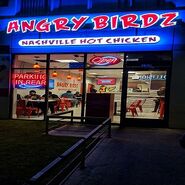 The logo that was used for the restaurant

In August 2019, Rovio removed most of their remaining games released from 2009 to 2014 due to "testing purposes", but later announced it was because they didn't have the resources needed to keep those games running older game engines up to the standards of the Apple App Store and the Google Play Store. Many fans disagreed with this situation. YouTuber Maximus Overdrive started the hashtag "#BringBack2012" back in September 2018 to protest many of Rovio's other decisions, but after this incident, the hashtag spread like storm. Many fans during late 2019 and 2020 started to spread it around on platforms such as Facebook, Twitter and YouTube. But this had many consequences, like the hatred and toxicity growing even faster for Rovio. In 2020, Maximus decided to leave the AB community because of this, while the hate and flame wars continued throughout the year. On June 22nd, 2021 however, Rovio made an official statement that some of the classic games would be remade and return to stores, such as Angry Birds Classic, Seasons and possibly more. After hearing this, many of the fans instead starting using #ThankYouRovio for the exciting news and the hashtag has died down in usage lately. On November 23rd, 2021, Rovio officially announced for the re-release of Angry Birds Classic (using the Unity game engine) to be in early 2022 and encouraged fans to reuse the hashtag to ask questions about the initiative and what the company will do with the other older games in the future.

Rovio in a nutshell
2019 Rovio

Rovio in a nutshell this month
2021 Rovio 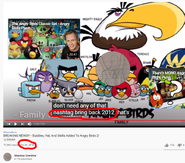 The first time the hashtag was used.

On August 25th, 2021, the New Mexico attorney general Hector Balderas announced a federal lawsuit against Rovio Entertainment due to the company allegedly selling information of minors (people under 13) to 3rd party advertising companies. It is said that the personal information collected includes data like device names, online activity history, and more and that Rovio tried to turn a blind eye against the issue, while marketing merchandise to young kids, like playsets and lunchboxes. Currently since this is ongoing, the judge hasn't filed a court date, but the court filings are public. On August 27th, the CEO of Rovio Alexandre Normand responded to a DM question about the lawsuit on Twitter that states that Hector hasn't contacted Rovio any time before filing the lawsuit and that they have not acquired the lawsuit yet. They also denied knowingly collecting data from minors.

[Update October 2021: Rovio in their newest Q3 investors report have confirmed that they have not been served the lawsuit and mention that the general's claims lack merit and overlook the investments the company put in to make safer playing environments in their games.] 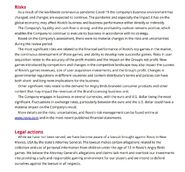 Rovio's official response to the lawsuit