Angry Birds 2 is a puzzle video game developed and released by Rovio Entertainment for the Angry Birds series. The game was soft launched in Canada on March 5, 2015 as Angry Birds: Under Pigstruction, and officially released worldwide on July 30, 2015.

Initially Rovio Entertainment Corporation stated that they won't make a sequel. However, they started to develop a game involving time travel, that game would be Angry Birds 2 at the time called "Angry Birds Big Adventure (ABBA)". The game was originally about time travel and one of the developers Måns Wilde said that the game was very story driven in early development. These time periods in the game would include a prehistoric level set in the Mezozoic period and a level inside the King's Diner set in the 70s. [View the Gallery for more images]

The game was soft launched in Canada on March 5, 2015 as Angry Birds Under Pigstruction. The game was launched worldwide on July 30, 2015.

At the Cobalt Plateaus, while the Angry Birds are sleeping, a Minion Pig approaches and steals their eggs, replacing them with sand bags. However, as he is about to leave, it is too late, as the Angry Birds have already spotted him, so the Minion Pig tries to escape with the eggs. despite the odds, he somehow manages to survive, and hops onto an airship with other Minion Pigs and King Pig on it. King Pig, having finally managed to get the eggs, laughs at the birds and leaves with the eggs.[1] Enraged, the Angry Birds start to chase the pigs, rescuing other partners in the adventure, who join them.

Trying to emulate the gameplay style of past Angry Birds games, Angry Birds 2 is a physics-based puzzle video game. As with similar games, the main objective is to pop all the pigs in the levels, who are sheltered inside of structures made of glass, wood and stone, alongside other objects. To pop said pigs, the player has to launch a limited group of characters using a slingshot. If they run out of characters without popping all pigs, they will pay gems or free bird tokens to continue or get a Level Failed screen and lose a life.

The main feature of Angry Birds 2 is the player being able to choose which character are they going to use; these characters are represented with cards. Every time, the player will only be able to choose up to three characters, while the other ones will appear as the characters are being launched. Because of this, certain characters can work better on certain structures, while they be weaker on other ones. Levels are divided into a series of "zones", one following the other. When all pigs in a zone are popped, the player will pass to the next zone, and so on until they complete the level. After beating a level, the player will get one, two, or three stars depending on their performance. There are also options to shuffle the deck for 20 gems (

) and the "Restart Room", which resets the room and gives you back your birds you used in that stage for 40 gems (

) , but these can only be used in the Clan Battles, Mighty Eagle Bootcamp, or even the aforementioned Rowdy Rumble event.

To launch a character, the player has to put their finger on the slingshot and drag it to aim. While aiming, they will be given a trail of white dots that will predict the area the character is going to travel through. Releasing the finger will result in the character being launched. In this state, the player can tap anywhere onto the screen to make them perform their special ability. However, they will only be able to use it once, and will not use it if they collide with any surface. Once the character is launched, the player will be unable to use them again; to compensate this, the game uses the Destruct-O-Meter, a gauge that will be filled as the player destroys buildings and pop the pigs. When full, it will empty itself and give the player an extra card.

In the game, there is a certian type of scoring system which has different mechanics affecting the number for the player. For example: a Hatchling will add it's own flock power to the level of your slingshot and times that number by 8 (total amount of birds in your flock). During events like Hatchling Fever, the score mutliplier can vary. For normal levels, there are 2 different stats for completing a section of the level:

The game story is followed on a World Map where the player can select a level to play. Levels are randomly generated (but always with the same maximum score achievable) and are divided into several categories:

Also, there are some pigs that have special abilities to prevent the birds from attacking. For list of special pigs, see Angry Birds 2/Special Pigs.

Spells are cards. You can get the spells as rewards in chests, and you can only pick one of each spell into a run. Spells only be used for Normal, Hard Levels. Boss levels cannot be used.

Ranks are the level of the birds in Angry Birds 2. The rank affects the multiplier of the score, meaning a higher level will achieve a higher score, filling the Destruct-O-Meter faster to get an extra bird card for the current level.

The hatchling is an egg near the slingshot that boosts the score multiplier. It needs to be feed daily to level up, otherwise it will leave and the score multiplier will reset. A level 1 Hatchling needs 5 apples every 24 hours, a level 2 Hatchling needs 10 apples every 24 hours and so on. You upgrade the Hatchling when feeding it a certain number of times. In a November 2021 update, the hunger monitor has at the bottom an age counter that shows how old your Hatchling is in days.

The Hats are optional cosmetics that give an additional multiplier to the player's main birds. Said hats are divided in different sets, and can be purchased with Black Pearls. Collecting all the hats from the same set will upgrade the slingshot's appearance and rank, and will give the player more Bird Power (+1 to every bird in the flock). The Hat Shop also has a Black Pearl treasure chest, which can be opened every twenty four hours.

After completing one of these Daily Challenges, the player will be able to play King Pig Panic!, three difficult boss levels that will give the player great awards when completed.

The Mighty Eagle's Bootcamp is unlocked after passing level 38 in the normal mode. It rewards Mighty Eagle Points and Coins depending on how far the player makes it in the daily training. Based on their performance, the player will receive a portrait frame. When a new season starts, everyone's scores and frames are reset.

The Tower of Fortune is a place where the player can win rewards, such as Gems, Black Pearls, Spells, Feathers and Hats. In every floor, they will be given four cards to choose, one of which having a pig card that will steal all their rewards if it is picked up. In the floors that are multiple of five however, there will only have hats to choose. The player can leave whenever they want and claim their rewards. On November 2021, the Tower of Fortune got a redesign that shows a new popup of gems flooding from the elevador door, separates the gems collected from the other items and shows new red text when you fail. Also, this update included the removal of the hat multiplier, so if you get the same event hat more than once, it doesn't add a temporary +1 to the bird's flock power anymore.

What it looks like now during a hat event

The Arena is a player versus player-styled mode where the players are matched based on skill rating. Every day, five birds are chosen for the Flock of the Day and are the only ones that can be used. Weekly, the player is matched with thirty other players of similar skill rating and will receive rewards based on the leaderboard result (who can gain the most rating in a week). The Arena gives rewards every forty five days based on the player's league achieved and performance in the season.

In the older versions of the Arena (before the major overhaul in 2021), you can change who you were versing for 15 Gems (

) and there were demotion zones for the league you are in, so being in the last 5 - 8 at the end of the week would get you demoted instead of the version of The Arena we have today where if you don't gain any Arena Rating, you won't be demoted immediately. The winning streak will varies in any league you're in, the higher the league, the better the rewards.

Events are active for a limited time and offer great opportunities for some rewards. If there is an event active, it will be indicated by a timer at the bottom of the title screen, and the different icons show the player which events are active at any given time. Some of the events that can appear are as follows (please note some name or description of the event can be incorrect):

Similar to achievements in Game Center or Google Play, these are missions that are intended to be completed over a longer period of time than the daily quests. Rewards for the feats include Feathers, Gems, Black Pearls, and Chests.

Clans are groups of players that join together in order to compete with other Clans or to complete Clan Events.

Update 2.15.0 adds clans as well as a ban system, Rovio has been editing the End User License Agreement (EULA) page since 2017.

This card will receive to player as part of the rewards an extra card and player can use to improve your possibilities if player complete the Daily Challenge. This card changes daily depending on the Daily Challenge theme (for example, if it's Bomb's Blast! the reward will be an extra card with Bomb). Complete King Pig Panic can receive one more card with one of the extra birds. Player can use them in Mighty Eagle Bootcamp and they are only available during the same day, so make sure to use them before they go away.

At the end of July 2021, the feature of Promo Codes was implemented into the game. You would navigate to the screen by going to the settings menu and tapping on the "Promo Code" button. The first publicly known promo code is "REDFAN", which is unknown what it gave, but it is speculated that it gave the player 200 Gems or Black Pearls.

The game has received mixed reviews. Pocket Gamer gave the game a 7/10, feeling that the gameplay was a step forward in puzzle design and the graphics were gorgeous—however, it did not like the energy system that, after failing to complete a few levels, either makes the player stop playing or use gems to continue playing; overall the website thought the game was Rovio at its best. IGN awarded it a score of 6.7 out of 10, saying "Ever-shifting levels and limited lives take a lot of the fun out of smashing pigs with birds in Angry Birds 2." 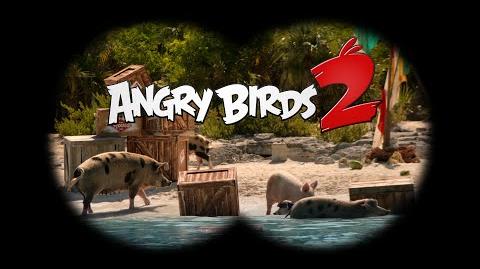 Angry Birds 2 Angry Is Back - Teaser 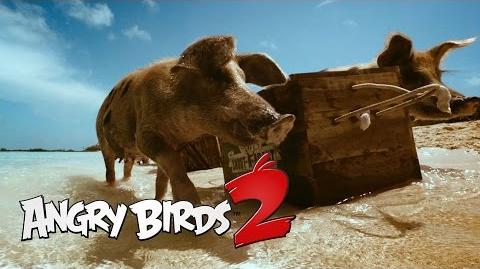 Angry Birds 2 Angry Is Back - Teaser 2 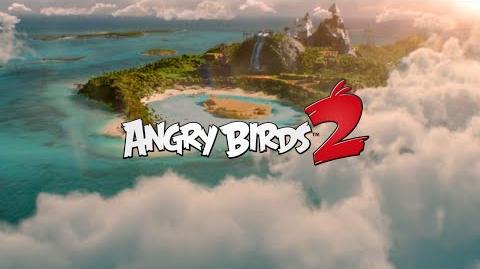 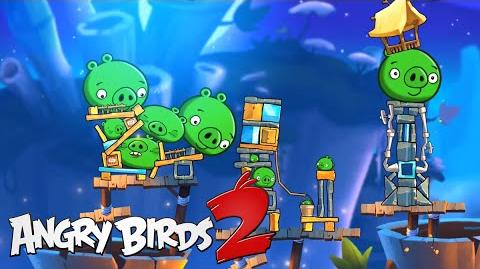 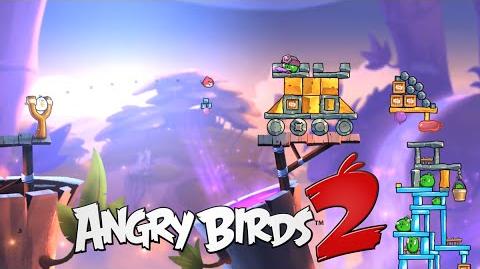 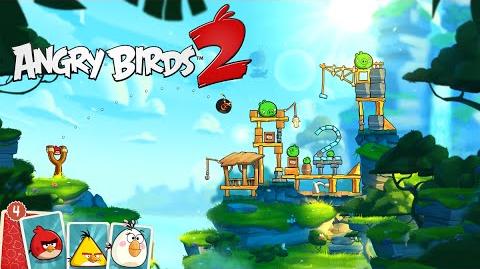 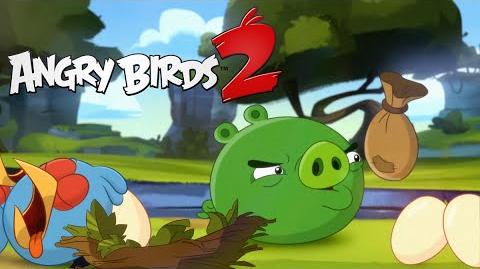 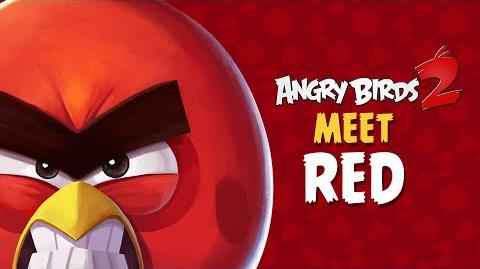 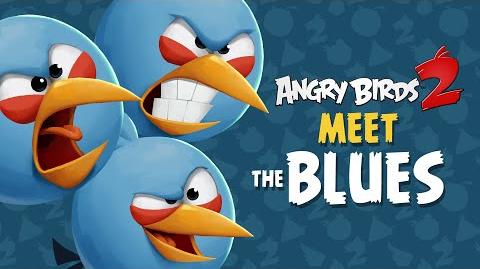 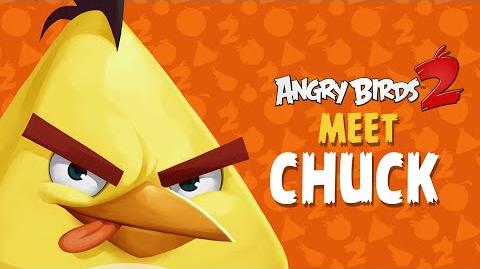 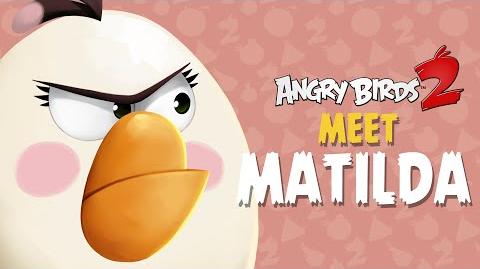 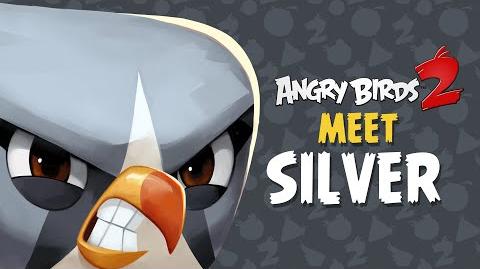 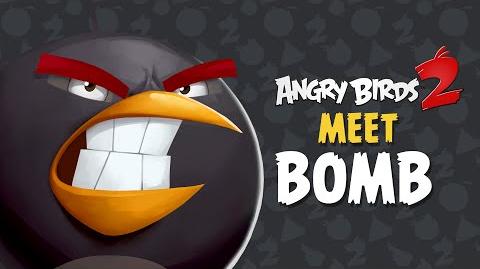 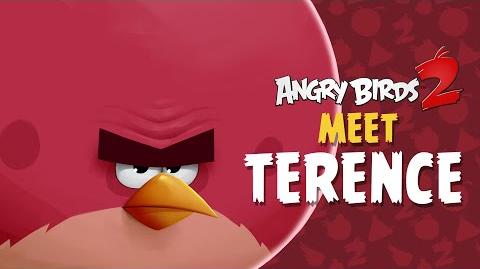 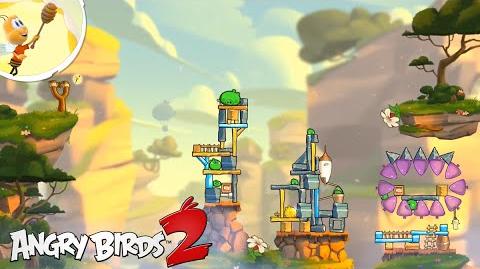 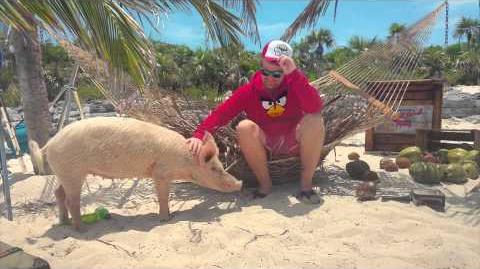 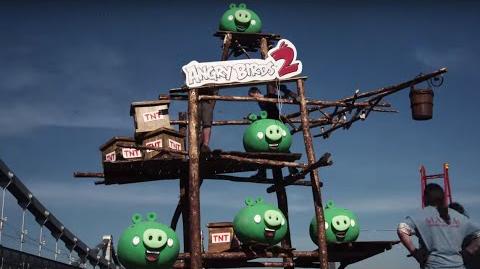 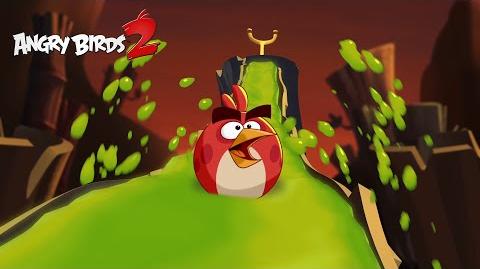 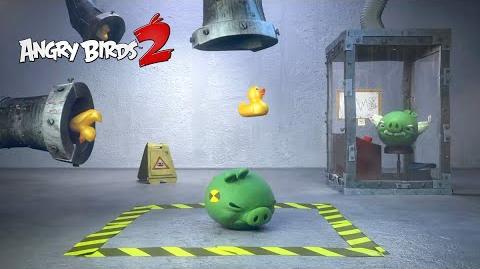 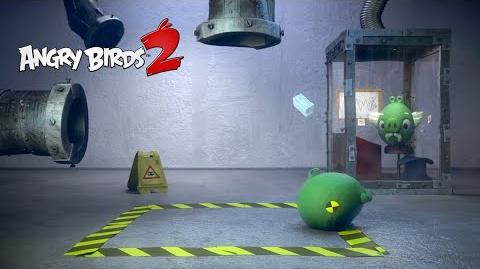 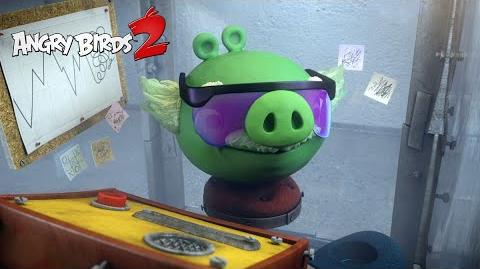 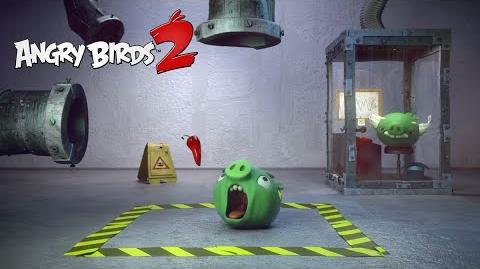 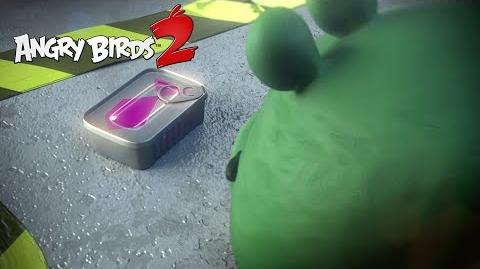 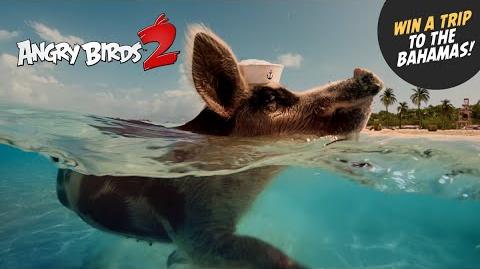 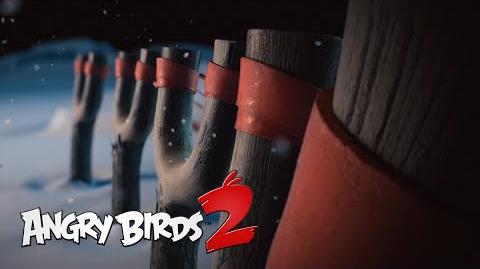 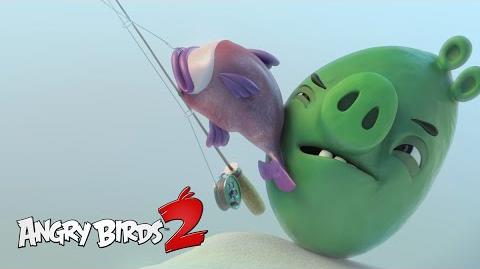 Protect our oceans with Angry Birds 2 and Apps For Earth! 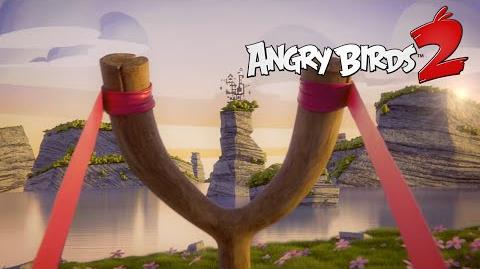 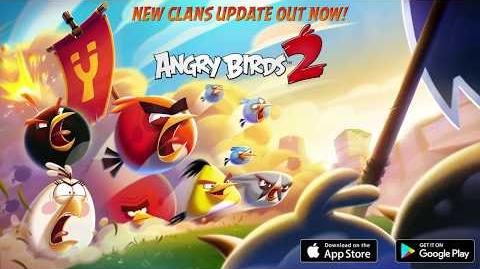 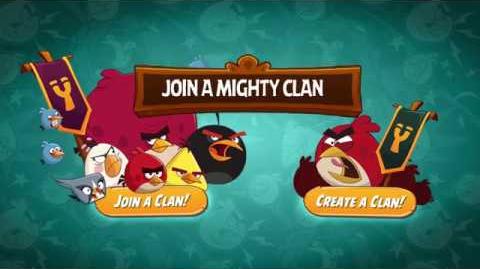 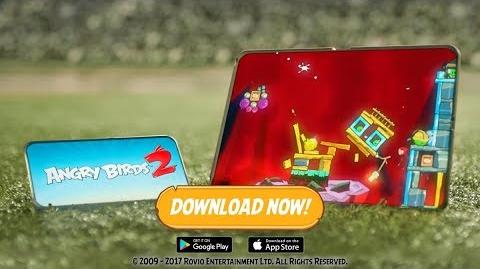