Angry Birds Ace Fighter (formerly known as Angry Birds Sky Fighters) was a canceled (and now discontinued) flying "shoot-em-up" game, it was developed by Siamgame and published by Rovio Entertainment.

At the beginning of 2016, there was information that Rovio Entertainment and Siamgame Mobile were developing a game with Scrolling Shooter gameplay and Toons visuals (the subgenre Shoot 'em up, in a similar game of the series, Angry Birds Transformers).

On May 31, 2016, the game was released in China as a beta test. Two months later on July 27, 2016, Ace Fighter was released in East Asian countries as an open beta test, while the game added English support to the game.

On September 5, 2016, it was announced that the game would be officially canceled on October 8, 2016, due to the adjustment of product structure platform. It's also due to Rovio's contract with Siamgame was expired. [1] On September 6, 2016, the game was removed from the App Store and Google Play and recharge was turned off, making the game practically impossible to play without IAPs or hacking to get the VIP and recharge rewards. On October 10, 2016, the game servers were shut down, to never reopen.

If the player tries to play after the period, they are still able to download the game's data and get past into the tutorial screen. However, they will be unable to play the server and the offline status is shown.

This marked the first ever Angry Birds game to be canceled. 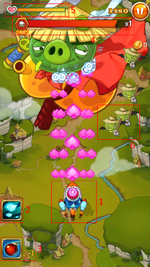 The game requires the player to control their plane by dragging on the screen. The main objective of this game is to defeat the enemy pigs to score points. Some enemies may drop special powerups when defeated. If the player has taken too much damage and deplete health points, the game is over.

There are 3 revival chances if the player is knocked out. It will cost 10 diamonds for the first revival and 20 for the second and 30 for the last revival. They will get a power-up, invincibility, and a random power-up. 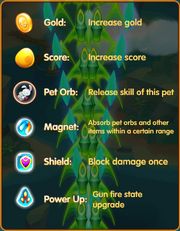 There are 6 different menus at the bottom, mainly

This shows the player's current energy level (which the max can be 999) and the player's intended max energy of 120. Energy can be gained via the following means:

The current energy can exceed the maximum amount. However, the energy stops recharging when it is more or equal to 120.

- You will need energy to clear stages. Remember to keep your energy above zero.

This is the game's basic currency. It is used to pay for basic stuff. Gold can be obtained by:

Diamonds are the game's premium currency. It can be obtained by doing the daily tasks or by paying a certain amount of real money (paying more real-life money will yield a larger diamond output). It will increase VIP points.

- Mysterious diamonds that can be used for buying precious things.

As of September 6, 2016, recharging diamonds is no longer possible and unable to increase VIP Privileges.

Pet Gems is the game's currency to buy pet's fragments, EXP potions, and crystals in birds' shop and gear in the trader. It can also be obtained by decomposing pets or pet's fragments.

- Obtained by decomposing pets, used for buying things in the Birds' Shop.

Enhance Gems is the game's currency to upgrade gear. It can be purchased in General Shop, obtained from Trial Tower or by decomposing gear.

- Enhance Gems can be used for enhancing gears.

(*) Note: Although this game added English support, the translation may not be correct. That's how their description is in the game.

For the info on all the birds' stats, see Angry Birds Ace Fighter/Home/Birds.

(*) Note: Although this game added English support, the translation may not be correct. That's how their description is in the game.

For a list of pigs, see Angry Birds Ace Fighter/Pigs. 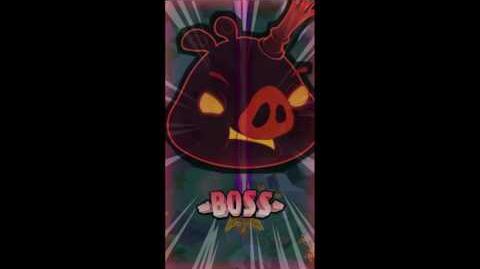 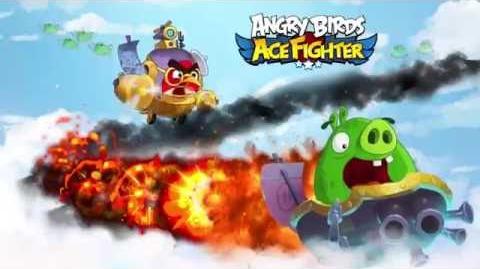 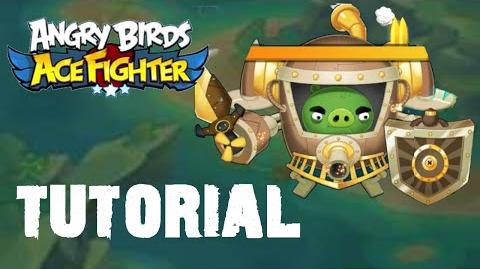