In this game based on the original Angry Birds, the player must eliminate pigs and destroy their buildings and structures at the same time. This is done by the birds launching themselves out of a giant slingshot and hitting the pigs' various constructs, henceforth eliminating them. Each level allows the player a certain number of birds, which must be used in the order provided. If the player runs out of birds and all of the pigs are not eliminated, then the game concludes in a loss, resulting in a Game Over; however, due to this, a number of tickets are rewarded while scoring points. The jackpot can be either of these amounts: (100, 250, 500, 750, 1000).

The screen when you put in credits

Angry Birds Arcade Game - Bonus 500 coupons!
What it looks like when you get the bonus

These are the locations of the machines when they first released for North America in 2016. 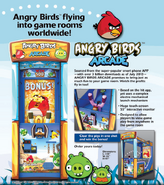