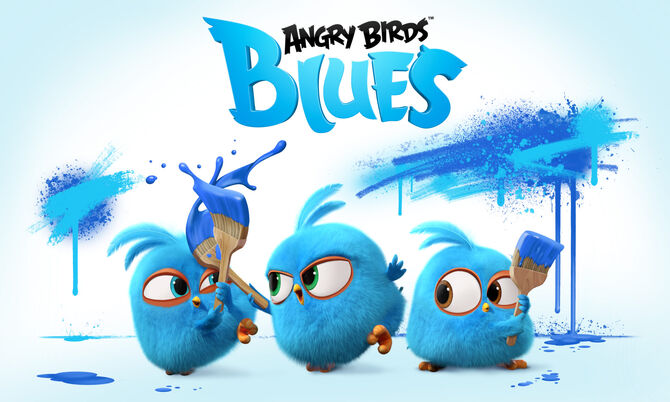 Angry Birds Blues is a Finnish computer-animated TV series from The Angry Birds Movie produced by Rovio Entertainment and Kaiken Entertainment Ltd., which premiered on March 10, 2017 in Toons.TV. The series showed The Blues' daily life with their friends and parents. It is shown in movie-style.[2][3]

Meet Blues Jake, Jay and Jim, rambunctious bluebird triplets with big ideas that wildly succeed or hilariously fail. But no matter what happens, this fun feathered trio ALWAYS bounces back... except when the Hatchlings show up.

Cute, clueless and gullible, the lovable flock of baby birds unwittingly makes things worse for the Blues in the most adorable way. Unfazed, the brothers simply shake their smoldering tail feathers and try and try again. Whether it's building a clubhouse ordered from the Mighty Eagle Express, or getting a kite to fly, the Blues' crazy antics become unbelievably hilarious disasters you can't resist. Every day on Bird Island is an adventure for these unstoppable brothers.