Angry Birds Champions is a game released on February 21, 2018. It has the traditional Angry Birds gameplay, but it has new Toons-styled sprites and sounds.

The game can be played on the official site or by downloading it on App Store, exclusively in Canada and selected states in the USA.

The gameplay is the same as other Angry Birds games but with some new tournament format:

The player can win cash prizes by playing the tournaments, making the game for 18+ only.The total prize is $500,00.

There are some new features in Angry Birds Champions. They are shown below: 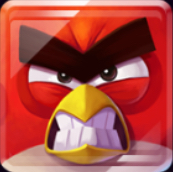