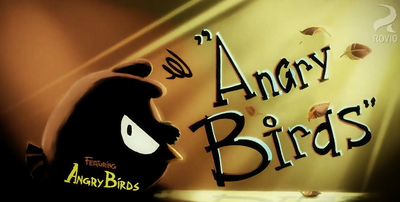 Angry Birds Cinematic Trailer (aka Angry Birds) is a promotional video for Angry Birds released by Rovio Entertainment on February 3, 2010. It was produced by Kombo Studio, who would later produce Angry Birds Toons. The video takes place during the events of Poached Eggs.

Enjoy the epic adventures of Angry Birds as they battle against the army of the Bad Piggies, ruled by the fearsome and ridiculous King Pig. The Bad Piggies are out to steal the eggs from the birds, and that just puts our fiery fowl in a rage.

The story begins with Red, Chuck, and Blue Jay taking much care of their eggs and in the distance, the Minion Pig, Foreman Pig, and King Pig are eating grass as food but are not enjoying it. Hungry, King Pig notices the Birds and The Eggs and he, Minion Pig, and Foreman Pig try to form a plan to steal them. Red sees a mosquito on top of one of the eggs and he tries to kill the mosquito, with Bomb and Chuck joining in. Meanwhile, King Pig cannot stop imagining cooking the eggs and tries to imagine what would life be with bacon for himself and no eggs for the birds. By the time they finish killing the mosquito, Bomb, Blue Jay, Chuck, and Red look at the nest and notice that The Eggs were gone, to their shock. They also see King Pig's footprints which lead them to him and the Foreman Pig roasting their eggs to make one piece of bacon for every pig. The birds are extremely angered, and they stare the two pigs down in a dramatic fashion that triggers a massive explosion, giving the pigs the rage warning to hand back their eggs.

Prototype version (Notice the "K.O." at the top, which wasn't in the final video)

Prototype version (Notice that compared to the final version, Foreman Pig was replaced by a Minion Pig in this scene)