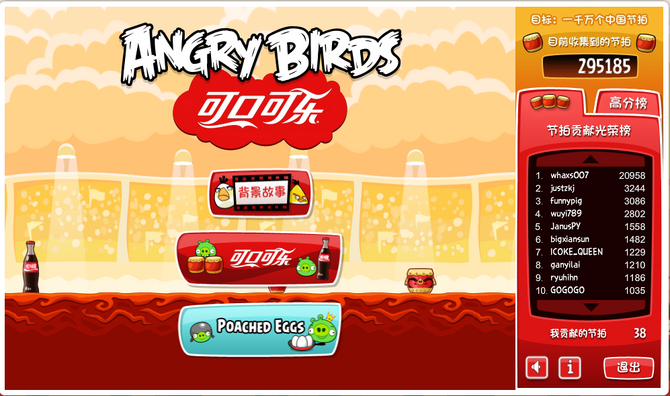 Angry Birds Coca-Cola (or Angry Birds 可口可乐 in Chinese) was a game released on June 11, 2012. This version was made with the corporation of Rovio, Coca-Cola Chinese and "The Chinese Olympic Games' Team". The story is centered at the London Olympic Games on July 27. The online version includes 5 levels unlocked already with 2 locked by hitting 40 drums (see below) with another 3 levels locked by getting 10,000,000 points in total. It also includes the first 21 levels of Poached Eggs. The website was originally hosted at Coca-Cola.angrybirds.com.

The birds that appear in the trailer are Red, The Blues, Chuck, Matilda and Hal.

Nowadays, this game has been removed, and the website (Coca-Cola.angrybirds.com) redirects itself to the Angry Birds Homepage. However, in January 2022, a twitter user that goes by @Reubenmations discovered the full game that was hosted on a Chinese appspot domain, which can be found here.

There are 4 normal drums and the Golden "Drum o' Doom".

The Drum o' Doom gives 5000 points when broken, but it takes several hits to explode. In the level which it appears, the King Pig is laying on it. 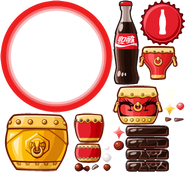 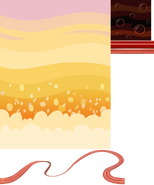 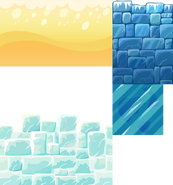 Note: Use "a@a.a" for the email and "a" for the password when prompted.