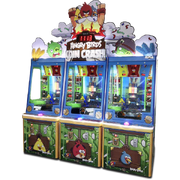 Angry Birds Coin Crash is a coin pusher arcade game released in 2021 by LAI Games. The game is a completely self-contained coin pusher that drops coins onto the playfield, and every coin pushed over the edge into the win slot earns tickets. Be careful though, because anything that goes too far left or right won't count towards your ticket count! Fill up different meters to win extra tickets or drop more coins onto the playfield, or fill up the tower meter to build a massive coin tower and crash it over the edge for a big ticket win!

Players work to build a tower of coins and crash it over the edge for a massive ticket win. Entertaining at every turn with multiple ways to win tickets. The impressive tower builder mesmerizes players and keeps them glued to the game until they push it off the playfield.

Coins used in the machine