Angry Birds: Double Crossed is an Action-Reality Game Show that was advertised starting on April 6, 2021, surprisingly only on Instagram. It includes popular social media creators like PewDiePie as "BirdDiePie" and Dr.Disrespect as "Dr. Pigrespect". When you click on the ad, it will bring you to a near good looking page of the Apple AppStore and when you click the "Download" button, it will take you to a survey asking how the game concept is. It is unclear if this is going to be an actual game however.

"ANGRY BIRDS DOUBLE-CROSSED is an action-packed, 5 v 5 reality competition show like no other! Ten contestants on two islands made up of Birds and Piggies race to maintain the tallest make-shift tower using parts they scavenge from their surroundings, all while under constant barrage from the opposing team's attacks. This is a rare-breed of reality competition though as in addition to the two teams of players, one lucky player each game will be selected to play the unique host of the show! These playful Angry Birds superstar hosts can give witty color commentary in real-time, offer a leg (or wing) up on the competition or wreak havoc on the teams if they wish. Flock together, build the strongest tower and race to beat the other team while dealing with the real-time influence of the show’s unique hosts! 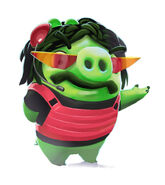