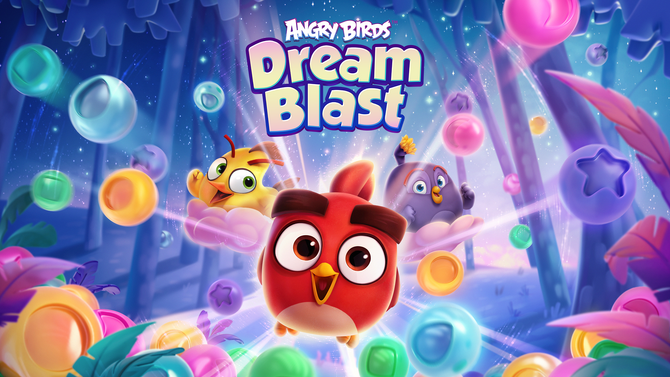 Angry Birds Dream Blast is a tile-matching game in the Angry Birds series developed and published by Rovio Entertainment.

The mechanics of the game consist of combining bubbles of different colors, while they fall, and fulfilling the requested objectives within the levels.

Angry Birds Dream Blast was soft-launched in the UK and Finland on October 3rd, 2018. In November of the same year, the game appeared on App Stores in the United States and several ad trailers played in the Angry Birds games, revealing that it would be launched soon. Very after, users could pre-register to the game and if they did, they would win a free starter pack. On the penultimate week of January 2019, the official Angry Birds Facebook Page revealed that the game would be launched on January 24th, 2019, An Angry Birds Friends Tournament was made to promote the worldwide launch of this game. On January 24th, the game was released worldwide.

Angry Birds Dream Blast is very similar to a match game, but the gameplay is very special, because the objects must be matched by making them near each other rather than in a column. Each level is filled with all different colored bubbles (officially called "Dream Bubbles") that bounce around according to the standard laws of physics, so anytime you pop a bunch of them, the rest scatter and bounce away in turn. Popping 4 bubbles or more will result in a Red and if there's another Red near him, he will merge and create a Chuck, if there's another Chuck near, he will merge and create a Bomb, which can't be merged. The more the bubbles, the stronger they are, their powers are the following:

For each level, you'll need to complete a number of objectives in a limited amount of moves in order to move forward. In some levels you'll have to break blocks of ice, in others you'll hatch eggs, and sometimes all you have to do is pop a bunch of colored bubbles. If you run out of moves and the objective has not yet been completed, you will fail the level. In total there are 9000+ different levels and some challenges.

There are blockers such as wood, glass and stone, that must be destroyed to provide more accuracy on popping the bubbles, some can't be destroyed, such as gold but they can be avoided. There are different types of combos to obtain, like "Nice", "Great", "Well Done", "Fancy", "Fabulous" and "Awesome".