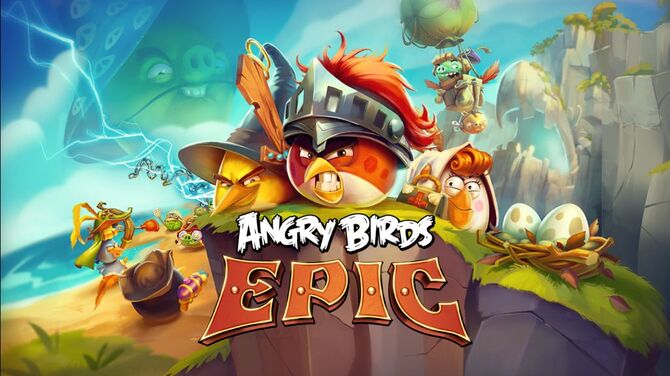 As of 2019, the game has been removed from the App Store and unlisted from the Play Store. While Rovio initially said that this was for testing purposes,[1][2] Rovio said on their support page that they wanted to stop production on this game, along with many other Angry Birds games released prior to Angry Birds Transformers (excluding Angry Birds Friends and Bad Piggies) to focus on the newer titles.[3] However, the servers have not been shut down, so the game can still be played as normal. However, the arena and the events are currently unavailable at this point, but the arena can still be accessed but cannot be played. However, version 1.2.1 can verse with Piggy Mc'Cool and Golden Pig Machine can still be used in arena along with only new player or reward is not claimed after season is end.

As of now, all the daily rewards offered from the calendar are replaced with Snoutlings.

In June 2021, Rovio stated on their website and Twitter that they were trying to bring some old games back. (most popular games) Still, only one game was remade and it was the original Angry Birds as Rovio Classics: Angry Birds.

During a normal day on Piggy Island, a hungry King Pig orders Wizpig and Prince Porky to go to South Beach and steal the Angry Birds' eggs. With the aid of several hordes of Minion Pigs, the two go to the birds' nest, where Chuck is resting while Red is protecting the eggs as usual. The pigs steal the eggs and the birds' personal equipment, and also kidnap Chuck. An enraged Red then makes his way through South Beach, freeing Chuck, who aids him in the battle against the pigs. The two also retrieve the Magic Anvil and the Magic Cauldron, and destroy the Cobalt Plateaus Castle, which contained one of the eggs. Meanwhile, Prince Porky and some pigs end up in Matilda's garden, where she is taking care of her plants. One of the pigs then started squashing her plants, which upsets her. However, Red and Chuck come in, driving away the pigs. Matilda then joins their team to help them.

Eventually, the birds go after Prince Porky, who is in an aerostatic balloon. Porky flees to the Desert Island and crash lands there (resulting in him going unconscious for some time). As the Desert Island and Piggy Island are separated by the Limestone Lagoon, which requires a ship to pass through, the birds are unable to continue their adventure. However, Bomb, on his Bird Ship, comes in to help his friends, only to be attacked by some Pirates. Though Bomb is able to expel the pigs with an explosion, it turns out that they fled with the ship's rudder, making Bomb unable to use it. After a series of battles, the heroes retrieve the rudder, allowing them to cross the Limestone Lagoon. However, when they reach the Desert Island, it turns out that they cannot continue their adventure because there is a yellow door, which can only be opened with a Yellow Key that Prince Porky, who is now aboard his own ship, has. Suddenly, Jim, Jake and Jay (a.k.a The Blues), who are in a small boat of theirs, come in, steal the Yellow Key, and go to the Southern Sea, where Porky and his comrades surround them, shooting at them with cannons, making them unable to escape. Later however, Red, Chuck, Bomb, and Matilda defeat the pigs and make their ships sink, allowing them to rescue the three brothers, who join their team. Prince Porky was able to survive his ship sinking, and swam his way back to Desert Island and into the castle. With the Yellow Key in their hands, the Angry Birds head to the Desert Island Castle and retrieve the second egg. After successfully obtaining the egg back, Prince Porky sailed away into the ocean on a new ship with an overwhelming amount of despair.

Later, the group passes through the Pirate Coast, the Slingshot Woods, and the Great Cliffs. They later go to the Star Reef and retrieve the third egg which was being held against by Wizpig. When they go back to the Great Cliffs, Chuck spots an egg lying on the floor and goes to pick it up. Suddenly however, hordes of Ninjas appear, blind the birds with smoke bombs, and kidnap Chuck, Bomb, and Red. Matilda and the Blues, who were the only remaining birds, followed the Ninjas through the Bamboo Forest, where they freed Chuck, and later Bomb. However, as they were about to free Red, Prince Porky comes in aboard a blimp of his and takes Red with him to the sky. The group went to Professor Pig's lab, and helped him gather the materials to build an Airship, which they use to free Red and make their way through the Winter Wonderland, the Canyon Land, and the Snowy Peak, where they retrieve the fourth egg. Wizpig takes the last egg to Pig City, where King Pig is. King Pig asks Wizpig if he has the five eggs, and the latter tells him that he only has one, much for the king's frustration.

Meanwhile, the Angry Birds pass through the Islands in the Sky, the Pumpkin Plateau, and the Square Forest. Just as they are about to enter Pig City, some Knights block their way. Red has the idea of using the Airship to pass through the troops. However, a catapult launches a rock at him, though it misses. The Angry Birds are then forced to enter the city through the Eastern Sea, only to have a large group of mines blocking their way. With Professor Pig telling them to use a submarine to pass underneath the mines, the flock goes to the Moorlands and has some battles on the Northern Sea, eventually managing to retrieve a Submarine from the pigs. With it, they manage to cross the mines and enter Pig City, where they have some battles against the toughest of Knights until they defeat Wizpig in a duel.

At King Pig's Castle, the Angry Birds manage to defeat King Pig, Wizpig and Prince Porky and retrieve the last egg. However, Wizpig betrays his comrades by stealing the egg and King Pig's crown while Porky curses at the traitor. The wizard pig goes to the Hog Head Mountain, where he summons five pigs to make a Magic Shield to protect a castle that the egg was being held at. The Angry Birds pass through those pigs and manage to destroy the shield. They have a final showdown against Wizpig, who turns into Demonic Wizpig. Then, Prince Porky comes in to help the birds. Wizpig is eventually defeated, the Angry Birds retrieve the last egg, and they give Porky King Pig's crown.

Angry Birds Epic is a role-playing video game. Similar to most RPGs, the gameplay style is divided into the map and the combat. In the map, the player has an aerial view of Piggy Island, where they can play in different levels, harvest items (if possible), or get objects at specific shops. When the player selects a level, they will be able to choose the characters they are going to use (normally, up to three characters are allowed to be chosen at the same time), and change their classes. There is also a small bar that features the enemies that appear in the level, as well as the class of most of them.

Combat in Angry Birds Epic is by turns; the player starts using their characters, then their AI controlled opponent uses its characters, then it is the player's turn, and so on. All characters have a health gauge beneath them that will indicate their health. When said gauge is empty, the character will be defeated for the rest of the battle.

To attack an enemy, the player has to drag their character to make them attack said enemy. In addition, they can also drag a character to one of their allies to give them a benefitial ability, or tap the character to use said ability on themself. By holding their finger on any character, the player will be able to read said character's statistics, health, abiilities, and effects. When any of the playable characters is damaged or damages an enemy, the Rage Chili will be slightly filled. When the Rage Chili is full, the player will be able to drag it to one of their team's characters to make them perform a special, more powerful ability. There are also potions, which can be dragged to any of the player's characters to make them use it. Each character can only use one potion per turn.

The battle ends when all of the player or the opponent's characters are defeated. Nevertheless, there are also "wave battles", which basically consists in a chain of battles, one directily after the other. If all of the player's characters are taken down, they will get a "Battle lost!" screen and a consolation prize. However, if this is the opponent's case, the player will win the battle, and get one, two, or three stars depending on the battle's duration and the characters' remaining health. Then, they will be able to spin a wheel, which will give them more prizes if they get more stars.

Angry Birds Dawn of Piggy Island is a Chinese version of Angry Birds Epic. The game was released in May 2015.

Difference between Epic and Dawn of Piggy Island

The game was mostly similar but the biggest difference in this version is the energy system. The player had to buy items or they couldn't play for a bit.[4]

Make your own Angry Birds Epic trailer! Out now! 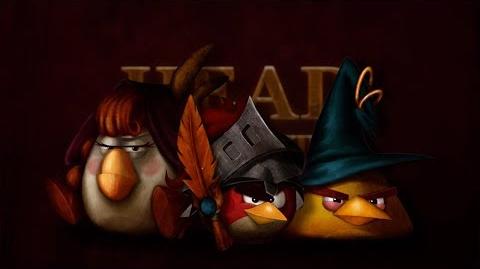