In the Beta Version, the soundtrack was very different:

The title screen on the closed beta contained Billie on the front and Jimmy (In his Strong White Dominion Evolution) on the back, while the background has blurry lights, making a dramatic background.

The softlaunch version featured a different Title Screen, but it was removed in later versions. Probably because of the character design errors and beta designs.

Kowalski is on the bottom with Connie on his left. Cyril, angry, and Tony trying to get on Dutch, Dutch angry because Kim Fli Hy is on his head and Mikhail holding his hand to dutch trying to see what's happening with Kumiko above him. Clive, Sam and Oliver in the middle. Amy , Kid YOLO, Billie and Derek trying to get the pig by hand and Thelonius and Noah are going to jump on him and Anthony fell, with red feathers falling. Walter is on the left of the top birds  seeing what is happening and Trey is watching all of them try to defeat a pig on a rope tied to a Bird Town house.

Dutch uses Max's colors and hair but the size and other features are the same as the one he has, while Mikhail has a beige beak. Trey has no eyebrows and saggy eyes, possibly a beta design. Cyril and Clive are in their beta designs on the title screen. Derek is without his tie. The pig artwork is also used sometimes.

A lot of birds' appearances were different from the final version: 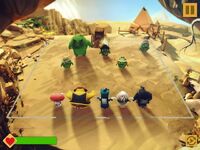 All of the Flocksburg Eagles Members during gameplay

In the beta version, the Hatchery was darker and contained a third 10x egg option, and birds appeared closer to the screen, didn't make celebrating poses and did not make noises when hatched. When an egg was being hatched, none of the objects in the background moved at all, unlike in the final version where the machinery becomes very active when hatching an egg.

Also, Mighty Eagle's plush had a different beak, which was open.

Some birds, emmited sounds that are not from their shape or gender, for exemple, Carter emmited a female sound.

In the beta, some characters had different speech that was modified in the launch version. For exemple, most of the dialog that had suggestive language was changed.

The layout of some parts of the game was different, for exemple, the banners in the Arena section were artowrk rather than 3D models and the Mission Levels didn't show icons, just text. In the collection, the unobtained birds weren't Frank silhoueted and instead had their own gray icons.

The normal playable birds were also part of the story ,where you had to find them to talk and talked with them, one of them being Shrapnel.

The test adventures were events that were still in test. The speech that the birds always said was The Jungle Is Densely Overgrown. It was later converted into the Missions the player needs to do in the campaign and events.

Retrieved from "https://angrybirds.fandom.com/wiki/Angry_Birds_Evolution/Unused_Content?oldid=256752"
Community content is available under CC-BY-SA unless otherwise noted.