This is a list of Events in Angry Birds Fight!.

Monster Pigs are appear randomly after fighting other players when there is an event. There are two different versions of each, Super and Normal. The only way to get Event Points is by defeating Monster Pigs. Event Points are the currency of Monster Pig events, and after achieving a certain amount of them the player will be awarded prizes, which can be any sum of Coins, Gems, or items, for birds and their boat. The prizes are limited and exclusive to events, and cannot be purchased or obtained otherwise. If the player does not take out the monster pig in time, the player gets no event points.

At the end of the Event, players will be awarded special items as a reward according to their rank in the event. The order of prizes with ranks are usually awarded in the following order:

During each event a limited time ship appears in the slot. This ship increases health, attack, or defense against a certain Monster Pig. They may also have other skills. This ship will be removed from the slot once the event ends. Starting from the Squid Pig event, other SS rank items appear in the slot. These stay after the event is finished.

Starting from the Turtle Pig event, a monster pig that has had an event already returns. The monsters that have returned are always in super form, give a lot more event points, always have a time limit of half an hour, and always return around the end of an event. They are also rarer. The monster that returns is the monster that is 4 events before the current event. Crab Pig returned in the Turtle Pig event, Sazae Pig returned during the Mecha Pig event, and so on.

The Kaijuu Family event brought a "Monster Slot". This takes place of the exclusive slot. The slot contains many different items featured in past exclusive slots, Dr. Pig's Lab chests, and a few next items exclusive to that event. To open the Monster Slot, you must defeat all four monster pigs in that event.

An arena event is an event in Angry Birds Fight! that is based solely on winning with a certain bird. You must choose that bird for battle. Each day you get arena tickets. You can also collect more tickets by fighting and completing the daily challenges. Each fight costs one ticket. There is a gold, silver, and bronze item to be won by your leaderboard ranking. Gems and coins can also be earned from this event. 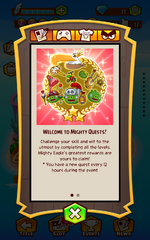 This section is in the need of expansion.