Angry Birds Football (formerly as Angry Birds Goal!) was a soccer game based on The Angry Birds Movie. it was developed by New Star Games and published by Rovio Entertainment.

Angry Birds Goal! was released on April 25, 2016 as a soft-launch. In later versions, this game changed it's name to "Angry Birds Football".

Rovio was comfirmed that Angry Birds Football has stopped development and the game will be shut down after December 15, 2016. In-app purchases was disabled on December 1, 2016. However, the game continues to function normally if remained on the device or installing by Jailbreaking or APK file. The notice still appears even after December 15th, 2016. [1]

This marked the second Angry Birds game to be cancelled, other being Angry Birds Ace Fighter. 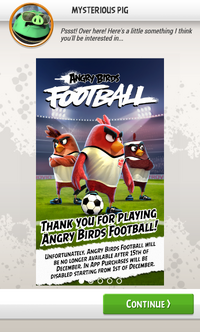 The gameplay of Angry Birds Football is different from all previous games in the series. This time, it's a soccer simulator. The goal of each level is to play for a team of birds, which in the end must lead to a victory over the team of pigs.

After the start of the game tutorial, it is necessary to transfer the ball from the bird to another bird in a special way so that in the end the ball is in the gate of the team of pigs.

Periodically, the player is invited to pass training levels that will help master the simplest tactics of the game, as well as learn to by pass the defenders of the opposing team, interact with other birds. Similar levels come only at the very beginning of the game, later they are no longer offered. In case of incorrect transfer of the ball, which leads to the subsequent interception of the ball by pigs, the player can repeat the moment of transfer. In the case of several unsuccessful attempts, the team is defeated.

Once its complete, the final statistics of the Chances, Passes, Goals and Assists are summarized. As well as a Star Rating to level up.

There are a number of special skills that need to be improved during the game. These include Pace, Power, Technique, and Defense to stand in a defensive position and technicality. The improvement of each skill occurs instantly for the in-game currency.

This section is in the need of expansion.

There are in a total of 9 leagues to complete.

) - To get energy reserves, a player can simply wait or buy an energy drink in a store for coins.

Screenshots from the app store 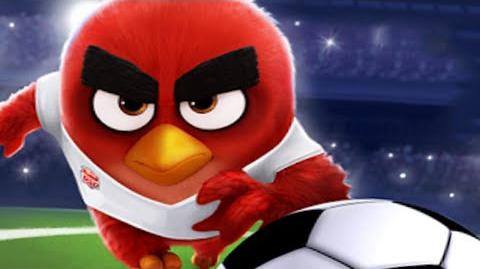 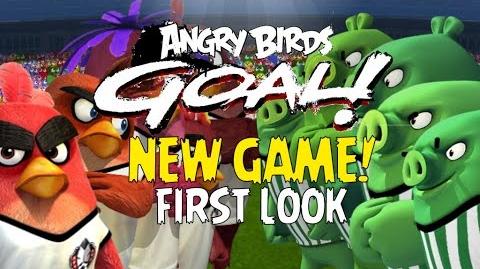 Retrieved from "https://angrybirds.fandom.com/wiki/Angry_Birds_Football?oldid=232028"
Community content is available under CC-BY-SA unless otherwise noted.