Angry Birds Free with Magic is the name of an Angry Birds game release exclusive to Nokia C7 and Nokia N9. The game was announced in April 2011 at the WIMA conference (WIMA is an event dedicated to NFC technology[1]).

The game uses NFC technology as a major aspect of the game and Nokia was one of the first phone manufacturers to implement this technology in its products. NFC (Near field Communications) allows two devices to communicate with one another by touching.[2] It is unknown if this game will work will continue to work as intended

A full version of the game has yet to be released, but the demo came preinstalled on the Nokia C7 as part of the Symbian Anna update. The game consists of 45 exclusive levels. The first five are accessible to play. Levels six through 20 require the player to touch phones with another person who has a Rovio compatible device to unlock the levels. They must then find a different person to unlock levels 20 through 50, and a third person to unlock levels 16 through 20.

A video showing the game capabilities can be seen here: [1] 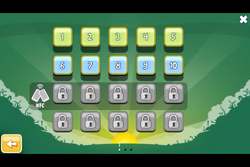 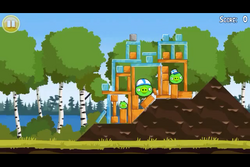