Angry Birds Friends, formerly called Angry Birds Facebook, is a collaboration between Rovio Entertainment Corporation and Meta (formerly Facebook), announced on the official Facebook page on January 25, 2012. The game was to be released on February 14, 2012, but appeared as a playable version on February 13 as a beta release. The app received a level-update on February 29 and March 29. Power-Ups originated here. It is the fourth main installment in the series, following the original Angry Birds, Seasons and Rio.

It was originally another webgame called Angry Birds Flash, a collaboration between Rovio and Adobe but got canceled and replaced by Friends in early 2012, after it's unknown/unconfirmed cancelation.

Rovio and Meta have collaborated in the past to add extra bonus levels to several Angry Birds Classic and Angry Birds Seasons episodes.

This article is about all tournaments. For weekly tournaments sponsored by a third party, see Sponsored Weekly Tournaments.

The original logo for Angry Birds Facebook included King Pig's three-pointed crown. However, on March 14, 2012, the logo was changed to include a less-specific crown.

In mid-May, the name was changed to Angry Birds Friends, The logo was also changed to Bomb, Matilda, Chuck, Red, and Terence's silhouettes.

In May 2013, the logo was changed from the silhouettes to just a simple logo with blue rectangles surrounding the word "Friends" because of the release on mobile.

In the mobile version, the designs of the Power-Ups were updated in April 2017. After that, in May of the same year, both the birds and pigs' designs were updated, leaving them with their Toons designs and giving Hal a brand new design, which he has a curved orange beak, a body like the classic design but with updated feathers and a yellow ring around the eyes. Corporal Pig, Foreman Pig, and King Pig kept their original designs but updated to be like their Toons designs. King Pig's crown received golden spheres.

In April 2019, the Facebook version also was updated with the new designs and was currently only for the pigs. Bird's designs were changed in January 2020 along with the removal of Story Mode and Bird-O-Matic.

In 2019, a Windows 10 port of the game came out which had an all-new menu. The changes in that version came to the mobile version in November 2019 and the Facebook version in January 2020. This is a bit about the original version and everything removed.

On April 3, 2012, AB Facebook introduced Golden/Easter Eggs. There were 10 eggs. Here were the locations.

On February 11, 2012, Rovio introduced a link via the Angry Birds Facebook page for users to create a customized Bird avatar. The customizations included a crown, cowboy hat, pirate hat, and sombrero, along with three types of sunglasses and an eye patch. Users can choose between Red, Chuck, Female Red Bird, The Blues, Hal, King Pig, Bomb, Terence, Matilda, Super Red, an Egg, Stella, & Bubbles as their customized avatar (only the first three and later Stella are available for free). A cryptic message about defending the egg with a large flock around a Golden Egg with a crown can be seen on the site.

Mighty Eagle used to be in the Facebook version of the game. He functioned the same as he did in Angry Birds Classic, Angry Birds Seasons and Angry Birds Rio.

The one change is that, as with the Power-Ups, the Mighty Eagle has limited uses and additional usage must be earned or purchased through the store.

Mighty Eagle was taken out of the game in January 2020. 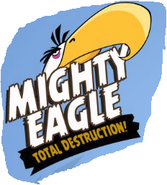 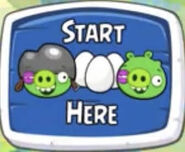 Power-Up Practice was a mode in the mobile version. You would be given unlimited power-ups in this mode. It was removed in December 2019.

When the wheel is spun 5 times