Angry Birds Go! is a video game that is a part of the Angry Birds series. It is a kart racing game similar to the Mario Kart series, developed and published by Rovio Entertainment. It was released in 2013 for mobile devices.

On Piggy Island, the Minion Pigs are about to have a race, with third prize being a stinky boot, second prize being an eaten apple, and first prize being a giant cake. The Angry Birds look at the cake, which makes them drool. Red steals one of the pigs' karts and has a race. After winning, his kart breaks down, much for his grief. However, Mechanic Pig, who was also planning to get the cake, takes Red and his destroyed kart to his hidden cave. There, he builds a new vehicle for Red, who uses it to win some races. Later, Red has some races against Stella who is defeated and joins his group. Afterward, the two race across Piggy Island, defeating more opponents who join their team.

Angry Birds Go! is a kart racing game similar to the Mario Kart games. The player takes control of a series of playable characters, who will participate in races and events using karts. In these races, the player needs to reach their goal in the shortest amount of time. After completing a race, they will get one, two or three stars depending on their performance during it. Should they fail doing so, they will get a Try Again screen, encouraging them to try again with Boosts or after upgrading their kart.

The menu of Angry Birds Go! takes place in the Mechanic Pig's cave, which is divided into three sections: the tree, outdors or in the cave. On the tree, which is unlocked after defeating Stella, the player can select what character are they going to play with, each with their own abilities; outdors, they can upgrade their kart with Bird Coins and participate in events; in the cave, they can select karts, or buy new ones with Bird Coins, with real money, or through the use of Telepods. Each character in Angry Birds Go! has an independient energy system, which is represented in five cupcakes (formerly orange dots); if they run out of energy, the player will be unable to use them unless they get enough rest or the player pays with Gems.

In the menu, the player can select which race to participate in. The player's chances of winning depend on their kart's upgrades and effectiveness, which is represented in CC (cubic centimeters, used to measure engine displacement). Before starting a race, the game will compare the recommended amount of CC with that of the kart the player is using; if the player's kart is low in CC compared to what the game recommends, the text of recommended amount of CC will be in red; in the opposite case, the text will be in green. If both amount of CCs are nearly identical, the text will be in yellow.

During a race, the player can mode left and right by either tapping onto the screen or by rotating the device. The races are divided into many modes, which are the following:

After the 2.0.0 version of Angry Birds Go! released in 2016 in promotion of The Angry Birds Movie, gameplay has been slightly changed, though still with some parts from the older versions. Now, the game starts in a level selection screen divided into eleven different sections, each having five levels with the last being a boss fight similar to Champion Race from the past version. In addition, the game also features the workshop, which combines the Mechanic Pig's tree and cave into one single menu. In it, the player can choose the racer they are going to play with, as well as buy new vehicles with the use of blueprints and upgrade them using upgrade parts.

The newer versions of Angry Birds Go! have a different energy system from that from the 1.0.0 versions. Now, all characters share the same energy; this means that, if the player runs out of energy, they will be unable to participate in a race with any character. A single unit of energy takes five minutes to be added to the player's energy, though all energy can be filled instantly with Gems. As the player advances in the game, races will require more energy; to compensate this, the game now makes use of ranks, which can be obtained with the use of XP, obtainable by upgrading karts or completing levels. When the player obtaines a rank, their energy will be upgraded and restored. They will also be rewarded with tickets, toolboxes, and others.

As mentioned above, the menu has many sections with five levels each. These levels take place in different courses of the game. They also make use of the modes from the pre-2.0.0 versions, though no tasks will be given to the player after completing them. Once the player completes a level, they will unlock the next one, and so on. They will also grant them one, two or three stars depending on their performance. Unlike the older versions, getting stars can now award the player with Bird Coins, new vehicles, tickets or upgrade parts.

The first information about the Angry Birds Go! appeared on June 12, 2013, while Rovio posted a small preview image and the game. A few days later, it was also announced that the game will be released for iOS and Android (later it was announced that the game was also available on Windows Phone 8 and BlackBerry). Before the beginning of the game production company Rovio has signed an extended license agreement with Hasbro, which they produce toys and games under the brand Angry Birds. Hasbro will be involved in the development of Angry Birds Go!, and in conjunction with LucasArts continue working on Angry Birds Star Wars. Development lasted long enough for a long time the news about the game almost did not come (probably due to the development of Angry Birds Star Wars II).

On October 31, 2013, Rovio released a countdown app called Angry Birds Go! Countdown, where the player could get acquainted with the characters, Telepods, and gameplay, as well as being able to watch game trailers. It was also possible to gain points, for example, going every day to the application.

On November 26, 2013, the game came early in the New Zealand App Store. The next day, it was also released in in Australia. On December 11, 2013, it was released worldwide.

As of Summer 2019, Angry Birds Go! has been removed from the App Store and unlisted from the Play Store in every country but Zimbabwe. While Rovio initially said that this was for testing purposes,[1] [2] they said on their support page that they wanted to stop production on the game, along with many other Angry Birds games released before Angry Birds Transformers, to focus on the newer titles.[3]

However, on June 22, 2021, Rovio announced that they will be remaking some of their older titles for newer hardware.[4] While Angry Birds Go! was not mentioned, a survey has started popping up for players of the game, asking about improvements they want added in the game.

The game has received mixed reviews, with a Metacritic score of 60% based on 22 reviews. The Guardian liked the gameplay and was not overly bothered by the in-app purchases. Tech2 did not like the energy system, which only allows players to play five races with a bird, after which they are locked unless they wait or unlock with Gems (which are slowly earned in-game or with an in-app purchase) and did not like the vehicle upgrade progress using in-game currency that is slowly earned by racing or with an in-app purchase for coins. 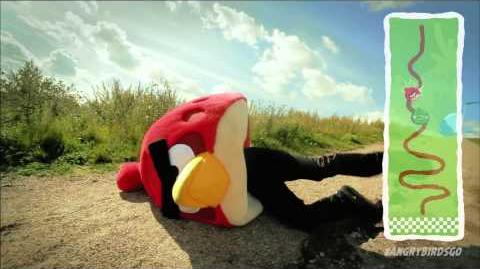 What IS Angry Birds Go!? 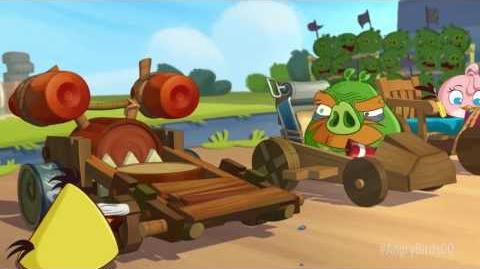 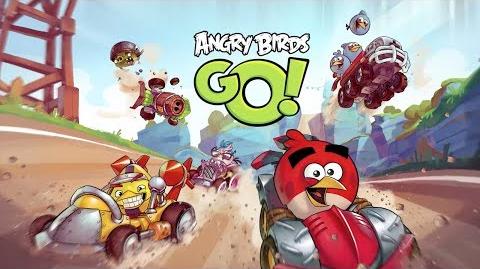 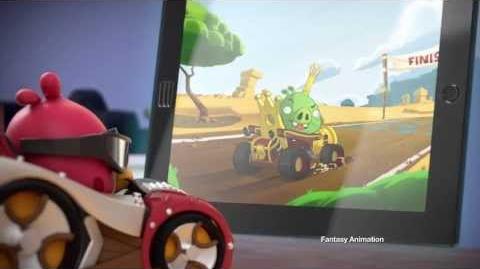 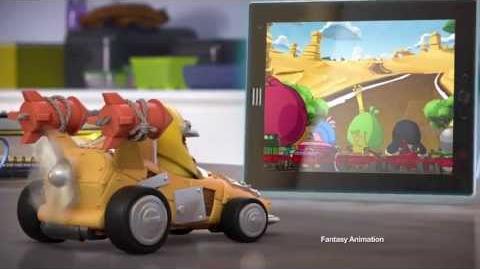 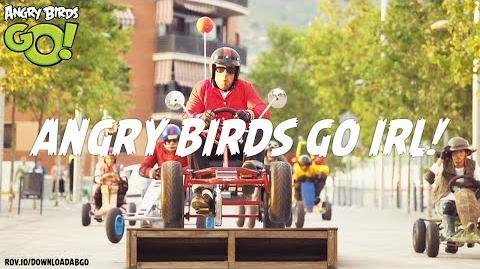 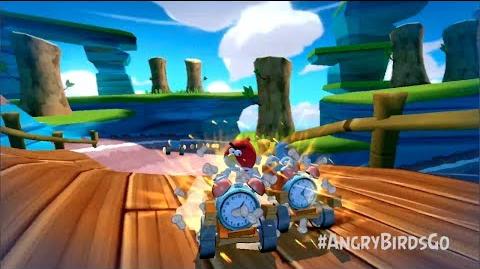 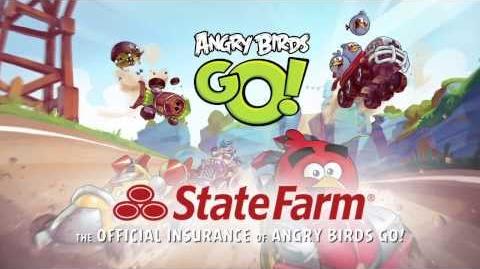 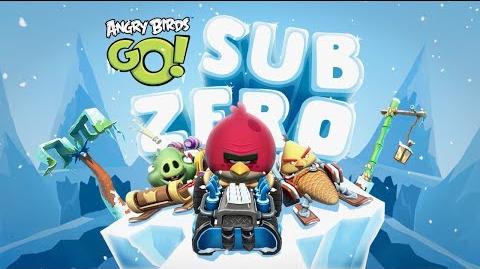 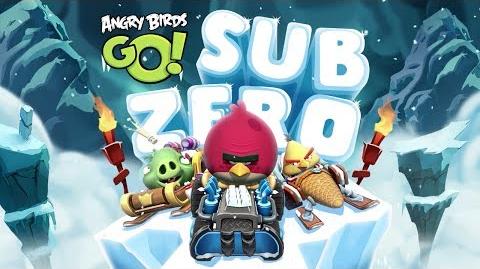 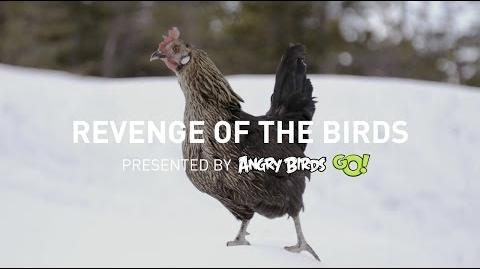 Revenge of the Angry Birds (on humans) 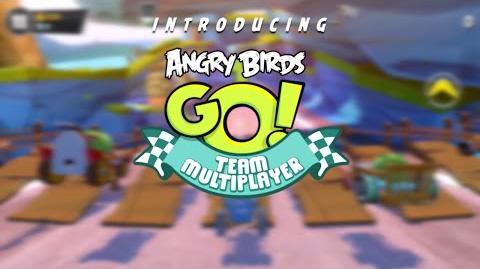 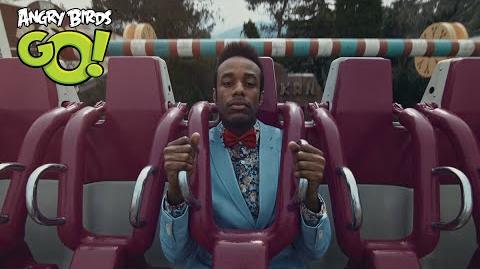 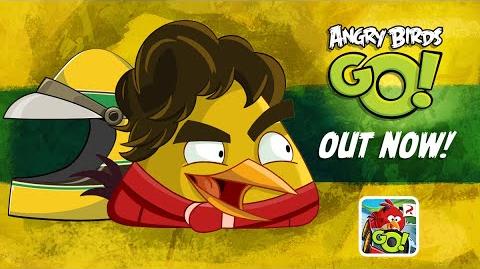