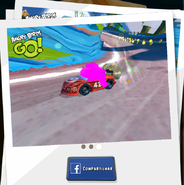 A Debug Menu is present in the game files based off xml/ui.pak and library code. It is unused but mostly usable, public builds of the game have stripped the code to load it normally, thus a library edit must be used to replace a given screen to load it. 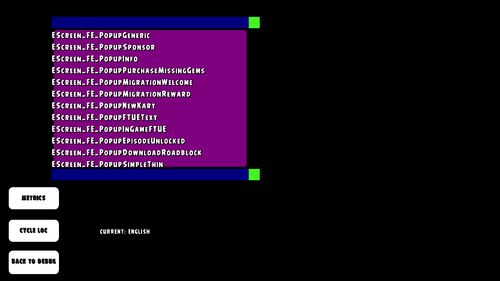 Text for a Developer (Cheat) Menu exists in localisation.pak/locdb.xlc, it can:

This is likely stripped for version 2.0.30 and beyond as no files or library code mention calling these in other versions.

A debugging feature tweak list is present in gameplay/misc.pak/ and is named: DebugTweakables.xml. It has a LOT of tweaks that are enabled (aside from true debugging tweaks) on every game bootup, even for a retail build, some code isn't present in the library and/or the XML logically, anything in XMLs ONLY from the Library can be used as settings are called from it and not the XMLs alone.

In-game debugging buttons are mentioned in UI.pak, in the XML directory, but they are hidden from releases.

The file debugtournament.xml in xml/tournament.pak has a lot of debugging tournaments for Chinese New Year, named DCNYXXXX (with X's to replace), for debug tournament selection.

If the game detects a missing string that the game expects in a file, it will say !MISSING STRING!.

In the character icon image ui_core.pak/textures/uicharacters_1_of_1.xgt (V2), there are complete icons for a Minion Pig for both the character select or daily challenge popup in v2 and online multiplayer team list in the v1 series before v1.13.9 as reserve drivers for players to replace them. There are also many unused sounds for them meaning Rovio was likely planning to make it possible to play as one. The character's script file is characters/charxml.pak/char_015.xml and it disabled the character as it instead used an AI rival. The character uses some of Foreman Pig's code, and also used Red's ability icon for the ability icon outside of a race. However has none of these have been coded, V1 also a similar player icon. There's also no animations programmed for use or directories of them for the character.

In one of the character script files: characters/charxml/char_016.xml, there's a mention for Dealer Pig and the script disabled the character, it is partially based on the unused/AI Minion Pig but preferably based on the Foreman Pig, it also used Red's ability icon outside of a race, there are no plain icons or sounds for this character during a race or at the showroom. The character is named MOUSTACHE PIG, the icon outside a race is Moustache Pig's in-race avatar from V1, stretched out to fit, the name of the character inside a race is not known in the game files. The ability he has is an instant explosion, but it unfortunately has no hitboxes, making it useless, it also has no icon during a race... Another thing is that the character "floats" over its vehicle, both during a race and in the showroom.

Senna Bird is no longer playable as of the v2 update, but most textures, all animations, and the character script for him still exist, but not all sounds are programmed to play. The only sounds that can play are for showroom idle, pre-race, some race sounds, and win/lose race are present. The texture of the character is a black square, likely meaning it's not in the game files. The ability icon in races is also not present, but the ability also works completely fine like before.

Senna Bird in his helmet is also no longer playable as of the v2 update, but most textures, all animations, and the character script for him still exist, but not all sounds are programmed to play. Only the sounds for showroom idle, pre-race, some race sounds and win/lose race are present. The texture of the character is a black square, likely meaning it's not in the game files. The ability icon in races is also not present, but the ability also works completely fine like before. The map icon also is missing.

The ETC1 compressed XGT file only has one texture in a 1024x1024 image, an unused image for loading a match in single player. It is named loading_background_sp.png and it is oversized by a decently sized portion. The file loading_tbm_cmp_noalpha.atlas also has this image used in the exact same size and compression. It is possible to load this from navigating to the new user screen and clicking GO! on an existing save before crashing.