Angry Birds Google+ was a special version of Angry Birds that was only available on Google+. It was quite similar to Angry Birds Chrome, and featured a special episode called Teamwork. This episode required players to invite friends to unlock new levels.

Google+ Gaming Service closed on June 30, 2013 and one of those games for Google+, was Angry Birds Google+.

At the end of the level, friends' high scores are shown 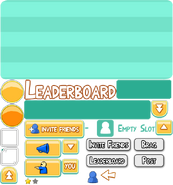