Angry Birds Heroes (also could have been named Legends or Infinity) is an unreleased RPG game involving Angry Birds characters and new characters in their anatomy from The Angry Birds Movie. Not much information is known about this game and neither its gameplay, as it was currently unavailable during development. It is the first Angry Birds game to be canceled before any sort of release or soft-launch.

Around December 2017, Rovio posted a survey for Angry Birds Heroes on their official Facebook page with a short trailer.[1][2]

Two months later, the game was cancelled during in development.[3] However, a game with a similar spirit, Angry Birds Legends, would later be announced in 2020.

The is played a similar way to a similar way to Angry Birds Evolution, with the difference being that it's side-view and with cards, the player unlocks new characters along gameplay, along with legends of the actual flock. After some turns, the birds can use their special abilities, which an animation will play and the bird you attack the pig dealing a lot of damage. There are classes for the birds, that are the following:

The pigs return also with classes and sizes, which are the following: 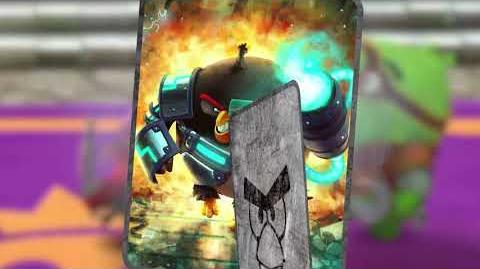