Angry Birds Journey (previously Angry Birds Casual) is an upcoming slingshot puzzle game developed by Rovio Entertainment. It is the nineteenth game in the expanded mainline series, and the eleventh mobile game to use the slingshot gameplay style. Despite this, the game bases itself on the more recent tile-matching games, such as Angry Birds Match and Angry Birds Dream Blast. The birds act more like moves to the player, with the characters being provided in a random sequence. In addition to pigs, the birds' goal is now to free encaged hatchlings, who sometimes have missions tied to them (getting their containers to the bottom of the stage or to the top), and levels are not replayable, thus meaning that the stars are removed. The game also uses the art style of Angry Birds Dream Blast, but features them without limbs (akin to the original designs) in-game.

Journey was soft-launched as Angry Birds Casual in the US, Finland, Poland and Sweden on Apple's App Store in March of 2020.[1] It was pulled from the App Store in December of that year, due to the game getting rebranded as Angry Birds Journey, which would release in the same set of regions, along with Denmark and Canada, on January 14th, 2021.[2] The new version of the game was set in a different, more tribal location, featured more pigs in the levels, and introduced the plot of a Minion Pig stealing an ancient egg that Red had found.

The game is a slingshot game, in which the players have to drag the rubber of the slingshot with the bird and aim it at the target, which are Caged Hatchlings. There are various unlockable characters and are again in "cute" style, and they have their original abilities (except for Red). There are sections for each level just like in Angry Birds 2. Each level has quests, like the Match games, such as freeing Hatchlings on jam, etc. The game is based off of a lot of Angry Birds Dream Blast features and graphics. The birds now have abilities that activate on contact with touching blocks these and cannot be activated by tapping. There is also an Anger Meter that fills up by breaking blocks which, once filled, will make the next bird bigger and stronger when the player uses the Anger Meter ability. In each level, there are "Moves," which are flings of the slingshot. Each fling costs one move. Each move gives a random bird, and if you run out of moves, you lose the level. You have to pay 950 coins if you run out of birds. There is the Sun Bar, where you fill it with Sun Tokens to get the Sun chest while your first and second rewards are 40 and 60 coins. The Sun Chest has 140 coins, infinite lives for 30 minutes and a powerup. The Star Chest is unlocked when you get 20 stars to open it. It contains a new profile picture, 420 coins and a new puzzle piece to add to the background.

(In order of appearance in the levels) 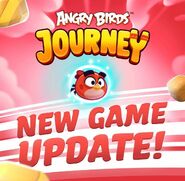