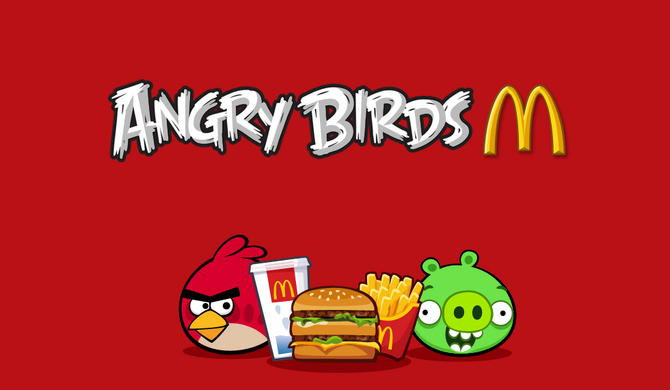 Angry Birds McDonald's was a game released on September 28, 2012. It comes with the regular powerups. This game is made to promote McDonald's. It comes with 4 new items: a burger, French fries, a drink, and a Big Mac.

The game is in Chinese and was made to promote McDonald's' Angry Birds promotion in China. There are 6 levels, but one can only play 2 of them. However, to play the other 4 levels, you need to register with your email.

The game can't be played anymore and its homepage is now redirected to the Angry Birds homepage. It was accessed here. However, in January 2022, a twitter user that goes by @Reubenmations discovered the full game that was hosted on a Chinese appspot domain, which can be found here.

Angry Birds McDonald's is a puzzle video game with similar gameplay to that from previous Angry Birds games. In the game, the player takes control of a limited group of birds, who can be launched anywhere by the use of a slingshot. All levels have a series of pigs the player must pop by the use of their characters. These pigs normally appear sheltered inside of structures made of wood, glass, and/or stone, in addition of some additional objects, such as TNT. If the player fails to pop all the pigs in the levels, they will get a Level Failed screen, encouraging them to try again. If they manage to do so however, they will win and pass to the next level. Upon completing each level, the player will receive one, two, or three stars depending on the score received.

As with other Angry Birds games, Angry Birds McDonald's is composed on several episodes contains four levels each; in this game, episodes are an episode taking place in a McDonald's restaurant in a city and an alternative version of Mooncake Festival from Angry Birds Seasons but with a few altered changes in the background, such as white clouds on the theme and rocks on the river. 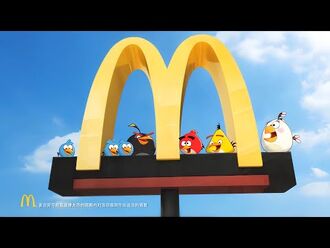