It features walkthroughs for the following games:

The website features strategies for Angry Birds Fight!, and it also has a Forum as well as communities, and a leaderboard, and also a blog which offers news and updates to upcoming games, and also guides and freebies. You will have to make an account. It has a Google and a Facebook account.

The 4th Anniversary of AngryBirdsNest level 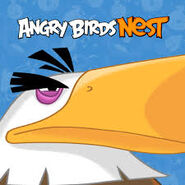 Logo of AngryBirdsNest
Add a photo to this gallery

Retrieved from "https://angrybirds.fandom.com/wiki/Angry_Birds_Nest?oldid=243171"
Community content is available under CC-BY-SA unless otherwise noted.