Map Music The game features the slingshot lined up in the bottom center, and the player flings the bubble to pop bubbles at the top with a combination of three or more bubbles with the same color. Each level will be given a limited number of bubbles indicated beside the slingshot known as the bubble count. Sometimes, there are some obstacles and special blocks that appear at the top along with the bubbles. This game features a common live system that starts with 5 x

. Each level attempt must have at least 1 life in order to play. When you run out of bubbles, there will be an option to continue by purchasing 12 x

in exchange for 5 x

each time or to give up. When you give up, will lose one of the lives. Afterwards, you may retry or if available watch an advertisement video to earn free boost at the beginning of the next attempt. If you lost all the lives, you must get lives from friends (

to continue playing. The game originally featured the five characters that appear in Angry Birds Stella formerly, and after the Hamhock Holmes update, 5 characters from The Angry Birds Movie and various classic Angry Birds games (including Stella as she is remained) were added. Each character will have a special power that can be used when the Pop Meter is full to unlock powerful boosts from their powers like Stella's Power Pop, Bomb's Blast Pop and many more

Streaks, that means popping 6 times in a row without a single miss. The levels are in different modes and each of them marked as an icon and the level number (

). Each kind of level has music in the game that distinguishes different types of gameplay. When the level is completed, the number of stars (

) and if Golden Feathers (

) were achieved, will be shown on the map (refer to gallery). Here we will show you a list of the kind of levels that have been known:

Each bird has a special pop when their streak meter is full.

Be careful when using a special pop against a powerup(s) as it will trigger the effects.

Boosters are powerful powerups that can be obtained by completing daily quests or by watching an advertisement video. They can be used on demand in the gameplay.

For a list of boosters and how to use them, see Boosters.

Since version 2.15, players are given 3 tasks to complete for 3 reward items such as boosters and gold. (Y denotes the number value). 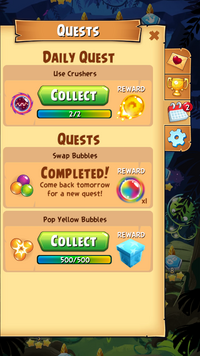 A quest will be shown while the task is in progression.

Collect rewards for each completed task. One booster for the first 2 tasks, and the last task will be a mystery boost reward either 2x or 3x of a boost.

By purchasing any bundle containing an infinite lives timer, or getting it for free, the player will have unlimited lives and will not consume one when failed to complete the level. The expiry timer is shown on the lives left meter. 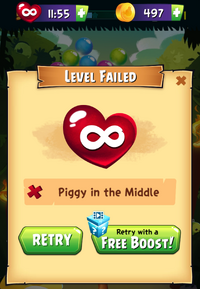 For a list of events, see Angry Birds POP!/Events

Costumes can bought with gems to the birds as attires, they are available only for the main birds and are each for a specific set, which are:

On September 17, 2016, it was announced that the game on Facebook will be officially discontinued to continue with the mobile version of Angry Birds POP!. This game on Facebook closed on December 21, 2016. It was taken down on January 2, 2017, as stated on the Facebook page. 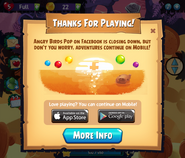 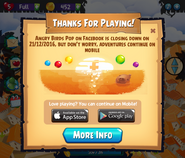 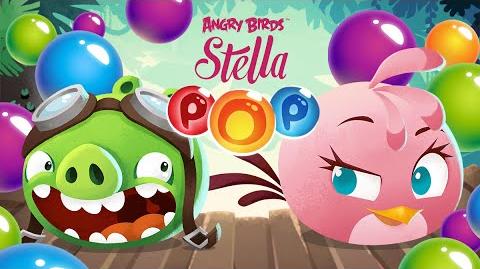 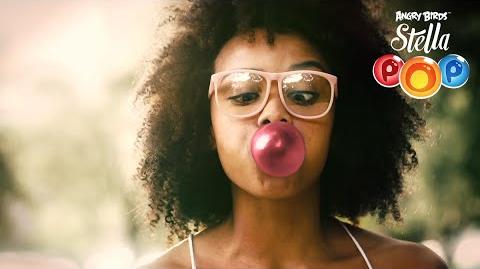 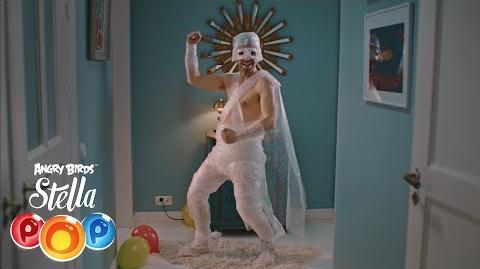 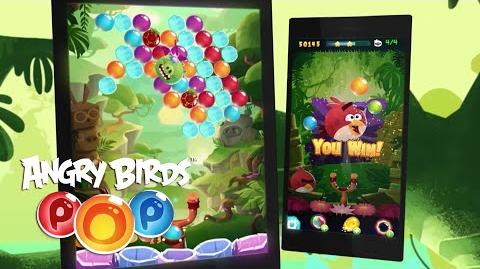