In the files of the game, the game is still called Stella Pop.

Pig Gate was first introduced in the worldwide release of the game and was no longer needed after the Red vs the Undead Update It was similar to the Candy Crush Saga.

To open the gate, it requires the player to request 3 Facebook friends to help open the pig gate. To otherwise unlock it instantly, it requires 12 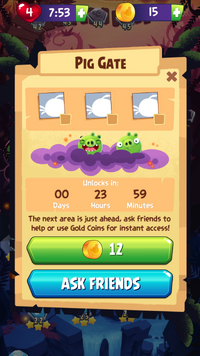 The critters were present until the Hatchlings update, then they were permanently removed from the game. They do appear on the map which is seen near the Waterfall area and formerly Willow had to free them. They were then converted into Hatchlings.

The Stella star sound plays along with the star animation on the scores screen. However, the sound is no longer available in the mobile version.

In very early versions of the game, the bucket was used as the score for bubbles to drop into. However, it was removed and replaced with Piggy in the middle.

In early versions of the game, the laboratory equipment was used as the score for bubbles to drop into. However, it was removed and replaced with the current one.

Poppy was removed in v2.34 and replaced by Bomb.

It appeared in version v1.18.0. However, it was replaced with the current icon.

Stella was permanently playable in Drop the Pigs until v2.3.0, now playable in Pop the Top.

Dahlia was permanently playable until v2.3.0

Poppy was permanently playable until v2.34

Willow was permanently playable until v2.34 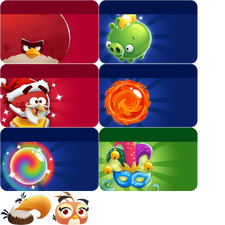 In recent versions, a sprite of Mighty Eagle was added, meaning that he can appear, but he doesn't appear in the game yet. 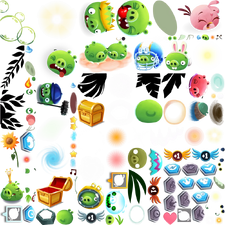