The opening of Angry Birds Radox.

The game can be played here. The website is the game. In the start, Red will give his commands, and the game will start.

The game has the classic Slingshot gameplay. To sling a bird, click the bird and drag the Slingshot's rubber to select its distance. Stop holding the bird to launch him.

If the bird hits a block, he will damage it according to its strength. Hitting a pig will damage him. Those items can be collected:

Those are the blocks:

Those are the objects:

Each time every bird is used, the game ends and the player's score will be shown.

Radox 12hr Scent Touch Body Wash is a fragrance produced by Radox. The product comes in the following variations: 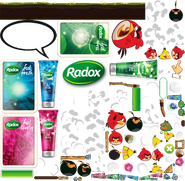