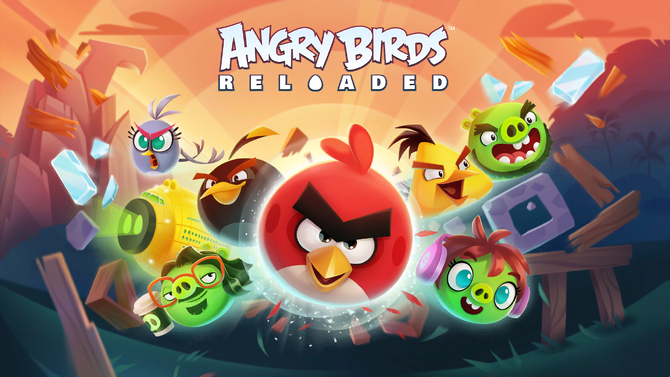 Angry Birds Reloaded is a game in the Angry Birds series, released exclusively for the Apple Arcade subscription service.[1][2] The game is a semi-remake of the original Angry Birds, though a completely separate remake is also in the works, while Reloaded has only been described as being "inspired" by Angry Birds.[3] The game's plot and episodes are inspired by The Angry Birds Movie and its sequel. The game released on July 15, 2021, at 11:00 P.M EST.[4]

Red catches three Minion Pigs spying on him while showing the different Pig City locations with Bomb, Chuck and the Blues. The pigs run off, but the birds chase them back, and proceed to destroy their fortresses with the aid of the slingshot.

Some time after, Red, Chuck, Bomb and the Blues climb up Eagle Mountain to find Mighty Eagle urinating in the infamous Lake of Wisdom, in which two Minion Pigs and Garry are found swimming and relaxing. The birds then demolish the pig fortresses found in the area.

On Terence and Matilda's wedding day, all seems to go smoothly until Leonard, Chef Pig and a Minion Pig break out of the wedding cake. The birds once again destroy the pigs' structures that were built in the area.

Afterwards, the pigs steal the eggs once more. This journey takes them to Piggy Island, where they find the pigs in South Beach reclaim the eggs in the Cobalt Plateaus.

While on Piggy Island, Red, Chuck and Bomb spy on Pig City on a tree branch, which Leonard saws off. The birds then destroy the structures found in the city, and make it to the Pig Palace. There, they find the eggs and reencounter Leonard and Chef Pig, who trap the birds in a cage. However, the eggs the pigs stole are fakes that explode when put into the cauldron, freeing the birds and defeating the pigs.

Some time later, a giant ice ball mysteriously appears on the coast. Red, Chuck, Bomb, Silver, Leonard, Garry and Courtney all come to the scene to investigate. Upon learning that ice balls come from a mysterious third island, Eagle Island, the birds and pigs decide to form a temporary alliance to save their homelands. The team make it to Eagle Island and separate into two groups: Red and Silver go on their own and spy on the eagle guards while the others use the Harvey suit to sneak into the ice cannon launching the ice balls. Upon making it inside the ice cannon, the group rejoins and meets Zeta, the leader of the eagles. Despite the team's efforts to take down the rest of the eagle army, Zeta and some eagle guards still end up capturing them. However, the ice cannon conveniently ends up exploding, freeing the birds and pigs and defeating the eagles.

Trying to emulate the gameplay from the earliest Angry Birds games, Angry Birds Reloaded is a puzzle game. In the game, the player takes control of a limited group of birds, who can be launched anywhere by the use of a slingshot. All levels have a series of pigs the player must pop by the use of their characters. These pigs normally appear sheltered inside of structures made of wood, glass, and/or stone, in addition of some additional objects, such as TNT. If the player fails to pop all the pigs in the levels, they will get a Level Failed screen, encouraging them to try again. If they manage to do so however, they will win and pass to the next level. Upon completing each level, the player will receive one, two, or three stars depending on the score received.

The world’s most famous flock has returned in a new version of the mobile game that took the world by storm. Join Red, Chuck, Bomb, Silver and the rest of the gang for classic slingshot action that will please fans of all ages. Angry Birds Reloaded features familiar physics-based gameplay from the original game - now remastered with visual enhancements, new characters, and plenty of destruction!

King Pig and his minions have stolen the eggs again and the birds will stop at nothing to get them back! Life on the island will never be the same now that the Angry Birds must face off against both Pigs AND Eagles from the Angry Birds movies in a battle to save their eggs and their home.

NEW GAME MODE Here come the Eagles! wreaking havoc on the island in a series of new levels. Can the Angry Birds stop them?

POWER UP! Boost your birds' destructive strength with power-ups. Aim farther, fly higher and knock down the pig’s towers!

TRACK YOUR SCORES with local leaderboards against friends and family members for top bragging rights. All scores are tracked on the same iCloud account.

A TIMELESS CLASSIC - NOW RELOADED Enjoy the familiar and satisfying slingshot action of the original Angry Birds game, with hundreds of levels of swine-smashing, eagle-whacking, destructive fun in gameplay.