Shakira would have appeared in the game but wasn't used. There are sprites of her in the files, but they're only for idle and launch. There are also sprites for yellow and orange heart-shaped bubbles, a hint silhouette and a tutorial sprite for her, which means that her ability would be the same as Stella and would probably replace her temporarily. 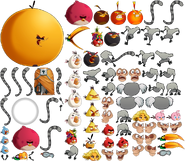 She appears next to the Marmoset faces. 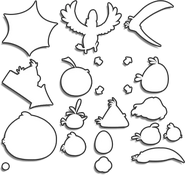 A sprite for a lemon appears in the files, however, it doesn't appear anywhere in the game, only in the Trophy Room Trophy Symbol.

A soccer ball appears in the same files, which it would act similar to a beachball.

Angry Birds Rio 2 Episodes would be different and larger, with the birds traveling to Brazilian States and locations,

just like how the protagonists do in the Rio 2 Movie. The locations are: Manaus (Contains the Amazon), Mato Grosso, Blue Mountains (Not a state), and Luis's garage.

It would be done through a map, but it was scrapped, probably for space, or it just doesn't fit in the tie-in. It was just seen in a Concept Art made by Florian Salomez, the one that designed the backgrounds.

There would be a level where the birds would be in a tribal rainforest. It's probably a beta version of the Blossom River and Timber Tumble backgrounds. They were scrapped due to space and because it was too cartoonish, not Rio-like. They were made by the same artist.