Angry Birds Seasons (formerly also known as Angry Birds Halloween before the Season's Greedings update), is the second game in the Angry Birds series. It was developed and published by Rovio Entertainment.

Angry Birds Seasons was released as a paid app exclusively for iOS in October 2010 as Angry Birds Halloween. In December 2010, the game would be updated as Angry Birds Seasons due to the adding of another episode, Season's Greedings, though the Halloween levels were kept in an episode called Trick or Treat. Angry Birds Seasons would also receive a free release on Android and Symbian devices, though with ads included in it. The game would continue receiving updates with new episodes that celebrated the seasons and festivities of the years, until 2016 with the addition of Ragnahog, an episode made to celebrate Christmas, set in a Nordic theme.

On August 23, 2011, The Mighty Eagle was released for the game on iOS devices.

Seasons was formerly updated on a semi-monthly basis, each update adding a themed episode stylized by an upcoming holiday and usually two Golden Eggs. (The exceptions: Easter Eggs has 11 Golden Eggs (10 in PC and Mac), Summer Pignic has 3, Wreck the Halls has 3, Winter Wonderham has 3 (7 in the Intel Golden Egg on android devices, that got removed on December 1st 2016), Arctic Eggspedition has 4, South Hamerica has 3, Ham Dunk has 3, Tropigal Paradise also has 3 and Pig Days doesn't have any) Angry Birds Seasons is split into seven Seasons: 2010, 2011, 2012, 2013, 2014, 2015, and 2016.

Since version 3.2.0, power-ups were added in gameplay.

In April 2019, the game was unlisted in the app stores but came back and received a new update. Afterwards, it was then unlisted again in July 2019. Rovio Entertainment Corporation stated that they had removed the games for testing purposes, but never explained what the test was. Later, the statement was changed to say that the game was removed because Rovio did not want to keep updating the game, now it is only available to download in Zimbabwe.

In June 2021, it was announced by Rovio on Twitter that efforts were going to be made to bring some of the original Angry Birds games back to online stores sometime in the future.

Angry Birds Seasons is a puzzle video game with similar gameplay to that from previous Angry Birds games. In the game, the player takes control of a limited group of birds, who can be launched anywhere by the use of a slingshot. All levels have a series of pigs the player must pop by the use of their characters. These pigs normally appear sheltered inside of structures made of wood, glass, and/or stone, in addition of some additional objects, such as TNT. If the player fails to pop all the pigs in the levels, they will get a Level Failed screen, encouraging them to try again. If they manage to do so however, they will win and pass to the next level. Upon completing each level, the player will receive one, two, or three stars depending on the score received.

As with other Angry Birds games, Angry Birds Seasons is composed on several episodes; in this game, episodes are based on different holidays celebrated throughout the world. The Android version also has a "Continue Playing!" option in the main menu which takes the player to the last level they played. Most episodes have exclusive features used to celebrate the holidays they are based off; for example, Go Green, Get Lucky makes use of cauldrons filled with money, while Halloween-themed episodes often have jack-o-lanterns. Nevertheless, some episodes may have elements that were taken from past episodes, such as Ski or Squeal and Ragnahog making use of Tony, a character that first appeared in On Finn Ice.

Like other Angry Birds games, Angry Birds Seasons makes use of powerups, which are optional booster items the player can use to get a temporal advantage to beat the level with more ease. These powerups are limited and cannot be used if the player runs out of them; to compensate this, Angry Birds Seasons also makes use of Bird Coins, the game's currency, which allow the player to buy more powerups and unlock extra episodes. While Bird Coins can be obtained by collecting stars or by watching ads, the player is also encouraged to use real money to buy more Bird Coins with real money to use in gameplay.

The Shop allows the player to buy powerups and Powerbirds with the use of Bird Coins to use in gameplay. It is divided on four categories.

The products that appear in the Shop are as follows:

Hats allows the player to give their birds Bird Hats to use in the levels. These do not affect gameplay however.

Quests gives the player certain tasks to get rewards. Its modes are the follows:

Quests tasks the player with finding certain objects in the levels. They can watch an ad to be taken to that level to find the object, or dismiss the task and get another one after thirty minutes. Once they find the object, they will have to wait fifteen hours (or pay with Bird Coins) to get another quest where they will have to find another object. When the player finds three objects, they will unlock a Bird Hat.

Challenges gives the player tasks that can only be completed by playing The Pig Challenge. Once a challenge is completed, the player will get eggs wearing crows.

Episodes is similar to Challenges, except that the tasks are completed by playing main levels.

In Progress, the player can claim rewards by collecting eggs in Challenges and Episodes. The rewards are the following:

Both Angry Birds Seasons and Angry Birds Halloween received generally positive reviews both by critics and fan alike. In Metacritic, it holds an user score of 6.9 for the iOS version based on twenty-two ratings;[1] a 4.3 score for the HD version of the game released on the same platform based on nineteen ratings;[2] and a score of 7.8 based on twenty-two ratings for the PC version.[3] 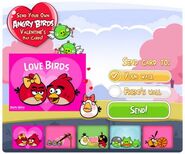 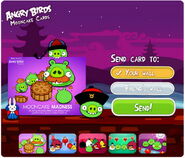 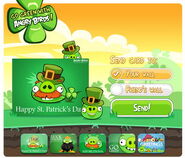 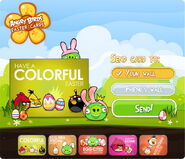 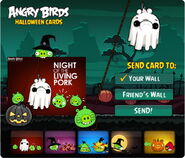 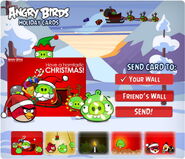