Not to be confused with Angry Birds: Birds in Space. 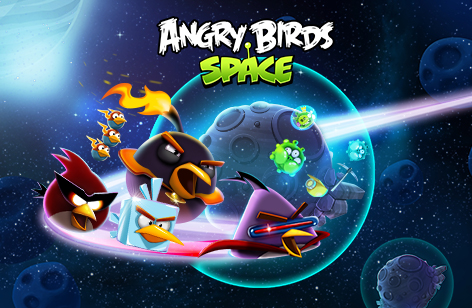 "The #1 mobile game of all time blasts off into space!"
— Tagline

Angry Birds Space is a video game that is a part of the Angry Birds series. Developed and released by Rovio Entertainment in March 2012 for mobile devices, it takes place in outer space, with the Angry Birds struggling to save the eggsteroids from the claws of King Pig and his minions.

It was first announced on the Angry Birds Space page.

The first posters before the Press Release first appeared on February 17, 2012. The very first poster featured a full-sized page of Super Red with words at the bottom saying 'TOP SECRET' along with the first video on the 16th. After the trailer, they released the second trailer on the 23rd showing two astronauts on a slingshot. Then on the 24th with the third trailer appeared showing the Lazer Bird. Then on March 3rd, it shows a spaced out pig for the first time.

After a giant claw kidnaps their eggs, the Angry Birds chase it into a wormhole and find themselves floating in a strange galaxy surrounded by space pigs! Luckily, the Angry Birds have superpowers of their own...

Angry Birds Space features 270 interstellar levels (or 386 (387 in Android) levels, if you count the Danger Zone, Eggsteroids, the Space Egg bonus levels, and the new Space Eagle bonus levels) on planets and in zero gravity, resulting in spectacular gameplay ranging from slow-motion puzzles to lightspeed destruction. With regular free updates, new in-app purchases, brand new birds, brand new superpowers, and a whole galaxy to explore, the sky is no longer the limit!

A: Angry Birds Space is a brand new game by Rovio, creator of the global phenomenon Angry Birds.

Mark your calendar and stay tuned for the biggest game launch since the original Angry Birds!

A: The official announcement was online on March 8th at 10 am EST/3 pm GMT at http://angrybirds.com/space. The announcement was literally out of this world, with Flight Engineer Don Pettit introducing the game from the International Space Station.

On March 14, 2012, The Daily uploaded a free app that acts as an official companion to the game. The guide contains detailed information on the creation of the game, new characters, and other information.

March 14, 2012, also saw the press release of a new collaboration between MTV's A THIN LINE anti-cyber-bullying campaign and Angry Birds Space. Once the game is launched on March 22, 2012, players who post a positive message to the Draw Your Line app will receive a hint as to where to get a code that opens a secret golden egg level. Additionally, an anti-cyber-bullying PSA featuring the Birds was released that day. [2] 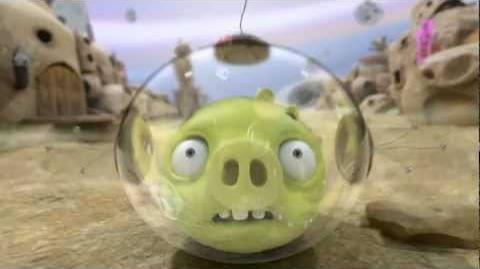 Removal from the app stores

In 2019, all remaining Angry Birds games that were released before Angry Birds Transformers (aside from Angry Birds Friends), including Angry Birds Space, were removed from the App Store and Google Play in every country except Zimbabwe.

During a hot day on Piggy Island, the Angry Birds task the Blues with taking care of the eggs while they get some rest. However, the Blues do not do their job, instead disturbing Bomb with noises. Red and Chuck are angry because the Blues are not taking care of the eggs, though they are relieved that the eggs are safe. Suddenly, they remember about the sun protection, and give the eggs some caps. The Blues propose giving the eggs some clothings, which annoys Red. All of a sudden, a warp hole appears from the sky, and from this, an alien bird called Ice Bird falls with an eggsteroid. He leaves a crater on the ground by the impact. Despite this, he quickly returns back to his senses and grabs the eggsteroid, which startles the other birds. Suddenly, an evil laughter is heard, and a metallic claw falls from the sky, grabbing a chunk of soil with Ice Bird and the Angry Birds' respective eggs. Furious, Ice Bird uses the flock's slingshot to pass through the warp hole to retrieve his egg. Soon after, the Angry Birds discover that their eggs were stolen as well, and they also use the slingshot to enter the hole, which gives them special transformations.[3][4]

With their new transformations, the Angry Birds end up in space, where they make their way through, defeating the hordes of Minion Pigs until they find King Pig himself driving an UFO he is using to control a vehicle he tries to use to battle the birds, though he is defeated. However, King Pig activates the defense system of his UFO, allowing him to escape through a warp hole. The Angry Birds follow him. Ending up in a cold region of the galaxy, the flock finds Ice Bird, who was injured in a battle against King Pig. The extraterrestrial bird joins the group, and they defeat King Pig again. However, Foreman Pig appears and steals one of the Angry Birds' eggs. When they defeat him, celebration is short-lived, as Red tracks a large pig eating an eggsteroid in a region made of sweets and desserts in the galaxy. Meanwhile, back on earth, Bubbles enters the warp hole and goes to space, aiding the Angry Birds. [5] The flock defeat the pig, which makes him spit out the eggsteroid in him, returning him back to a normal pig. The birds later go to a red planet where they defeat the hordes of pigs.

Some time later, King Pig goes to an aquatic region in the galaxy with an eggsteroid, and the flock goes after him. After defeating him, they are happy that they got the eggsteroid as King Pig takes advantage of this moment to escape. Later, their eggsteroid is stolen by the Space Pig, though they still defeat him and retrieve the eggsteroid. Afterwards, they are surprised by a meteor shower, which is revealed to be King Pig in his antics again. After a series of battles, they defeat him once again.

Later, the birds find some purple smoke covering a part of the galaxy. When they check, they find Hektor Porko with some eggsteroids. The Angry Birds soon after pass through a vortex, ending up in the Mirror World. They later defeat King Pig and his minions and retrieve the eggsteroids.

Some time later, the pigs build a contraption made to track eggs across the different galaxies. They soon after find that there are eggs in the Solar System, and they go there to find them. Witnessing this, the Angry Birds go to the Solar System as well to stop the pigs.

Angry Birds Space is a puzzle video game with similar gameplay to that from previous Angry Birds games. In the game, the player takes control of a limited group of birds, who can be launched anywhere by the use of a slingshot. All levels have a series of pigs the player must pop by the use of their characters. These pigs normally appear sheltered inside of structures made of wood, glass, and/or metal, in addition of some additional objects, such as TNT. If the player fails to pop all the pigs in the levels, they will get a Level Failed screen, encouraging them to try again. If they manage to do so however, they will win and pass to the next level. Upon completing each level, the player will receive one, two, or three stars depending on the score received.

Like other Angry Birds games, Angry Birds Space makes use of power-ups, which are optional booster items the player can use to get a temporal advantage to beat the level with more ease. These Power-ups are limited and cannot be used if the player runs out of them. To get them, the player needs to complete episodes or pay with real money.

The shop is where the player can buy Power-ups using real money. The products that appear in it are the follows:

To promote the release of Angry Birds Space, Rovio released a digital comic which takes place before the game. Four years later, IDW Publishing would make two stories using elements from the game for issue 9 of the 2016 edition of their Angry Birds Comics comic series.

In early 2016, it was announced that Rovio would be aiding with Brazilian video game developer IMGNATION to develop a VR re-release of Angry Birds Space, which was called Angry Birds Space VR. It was shown at a few events in the United States and Brazil. However, no other details of the game have been revealed since then, and the current fate of the game remains unknown.[10] 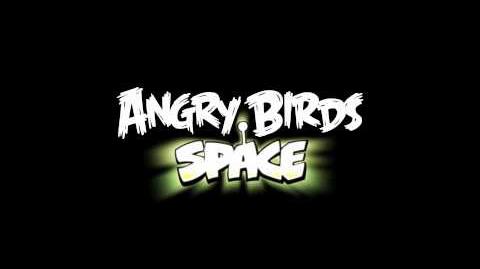 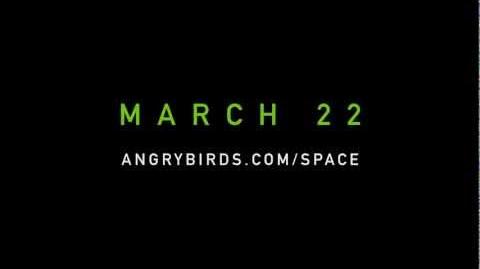 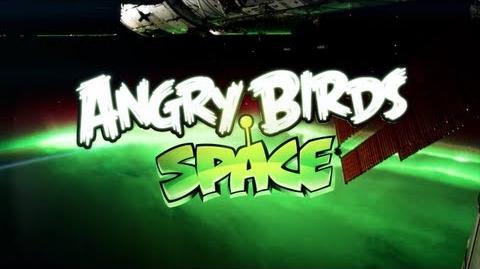 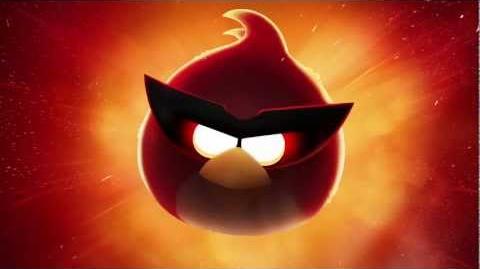 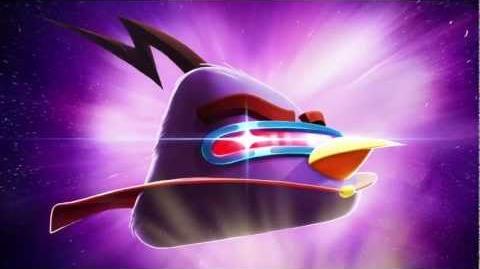 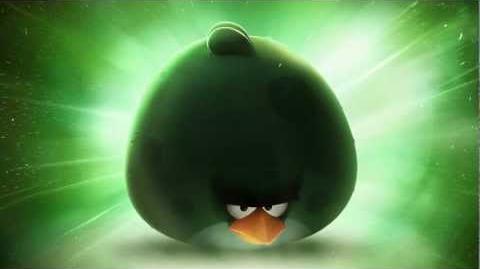 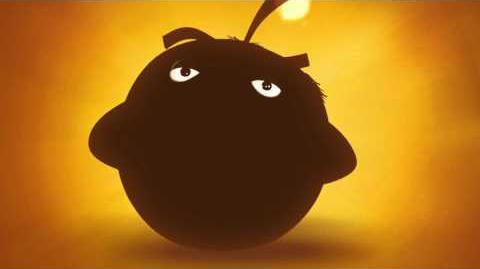 Bomb explodes on to Angry Birds Space on March 22 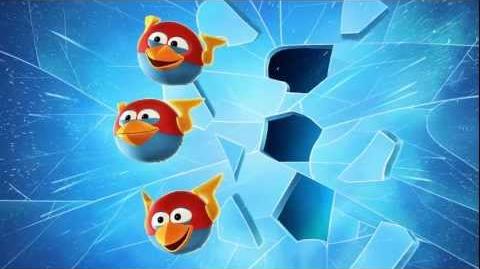 Blue Birds are back in Angry Birds Space on March 22 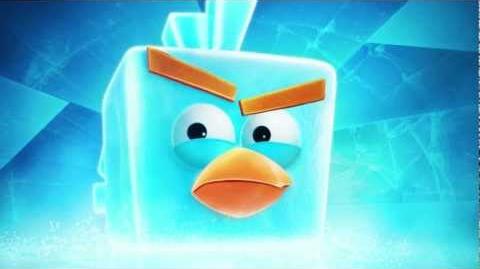 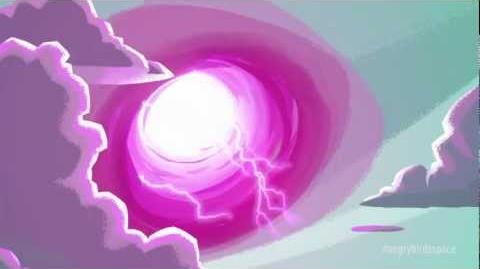 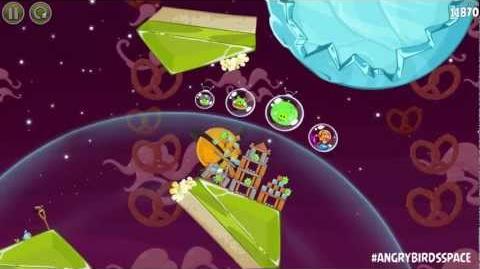 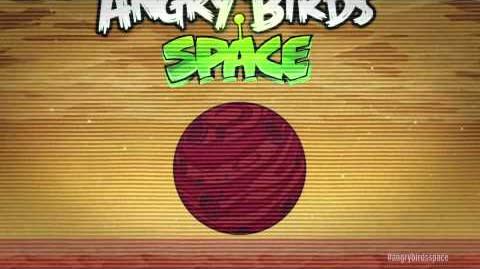 Angry Birds Space What did Curiosity find on Mars? 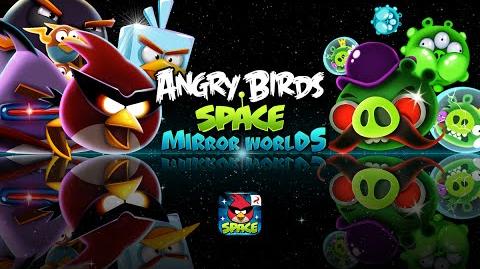 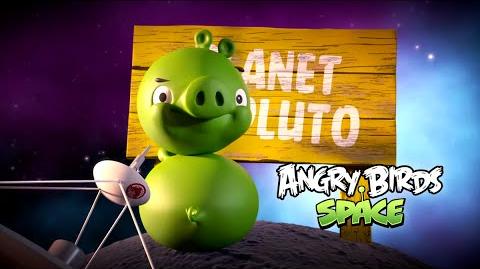