In the sprites for the birds, there are several facial expressions that went unused. Some of them include cheering/happy faces, looking to the side, and Bomb's collision face.

In the files there is a sprite for an icon of a racing UFO that would be used to promote Angry Birds GO!. It's a normal UFO but dark blue and with a black and white finish line checkerboard pathern around a round glass dome and a small flag with the same pathern sticking out of it. 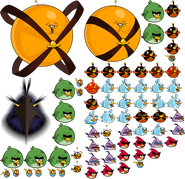 There are sprites for dipping chocolate and honey that were meant to be used in the Waffle Walls. Syrup was used instead.

There are sprites for top hats for Hektor Porko, which were unused and replaced with a round top hat. There are purple and black versions. 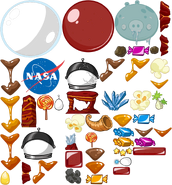 The Chocolate and Honey can be seen in the sheet, along with the Red Planet diamond.

There are sprites for a Snowman that isn't in the game, some dark purple sunglasses, a compact fiery asteroid, a crystal flower, a raspberry, some antennas, a tin foil hat, an ice star, and some blocks of snow. In another sheet, a diamond in a rock for Red Planet can be seen. 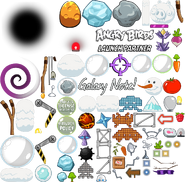 In older versions, two 10,000s are green in the files. These are leftovers from Angry Birds Rio 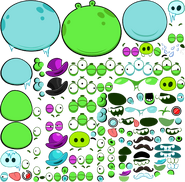 The Top Hats are seen in the middle.

There are six audio files that were not used in the game. They are called AB_space_level_menu, AB_space_stars_03_example, bosstest, spaceAmbient01, spaceAmbient02 and World_1_Ambient. AB_space_level_menu is a theme that could've been used as a theme for level selecting, hence the name of the file. bosstest could've been the original theme for the boss theme levels, or used as a placeholding theme. spaceAmbient01, spaceAmbient02 and World_1_Ambient are unused ambient themes that could've been originally planned to use for a scrapped or already existing planet. AB_space_stars_03_example is an audio that sounds very much like getting three stars on a level, but slightly different.

There is also an unused sound for Firebomb called BombLaunch, which is his regular sound effect but lower pitched. His in-game launching file is called launchBomb.