Angry Birds Star Wars II features a lot of unused content and they are:

In the sheet for characters, sprites for the Rebel Pilots can be seen, they would probably appear in the game but weren't used. A reason for this is because their power is the same as the Jedi Younglings.

In the files, there is a sprite for Yoffar which would replace the Spies or Rodians in the Pork Side Levels of Rebels.

The initial title screen would include Cloud City on night and with different buildings but it's now the same as the Rise of the Clones Bird Side background.

The initial episode select was simplier, with just some stars and different button placement. 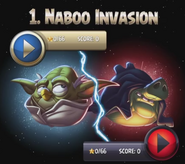 In the telepod trailer of Angry Birds Star Wars II, the Battle Droids are different, with green armour parts instead of skin.

In the gameplay trailer, Anakin Skywalker Episode I's Podracer has a simplier and longer design.

Retrieved from "https://angrybirds.fandom.com/wiki/Angry_Birds_Star_Wars_II/Unused_Content?oldid=251235"
Community content is available under CC-BY-SA unless otherwise noted.