The primary feature of Star Wars II is the ability to side with either the Republic (Bird Side), or the Dark Side (Pork Side), each with their own sets of playable characters and chapters.[1] The game also features the use of "Telepods" plastic stands that enable players to import specific figures into the game, which can then be used in-game.[2]

Telepods Exclusive from the first game

Angry Birds Star Wars II has more than 150 levels now. In each episode, there are two sides: Bird Side and Pork Side. In the first episode, you have to play as bird side before pork. But the other ones, you can choose side to play and collect more enough stars for each episode to play another side.

There are twenty levels each side each episode, not counting Revenge of the Pork (16) and Rebels (12). In the pause menu, the level codes are B or P following with episode number-level number in this episode such as:

These are episodes in the game so far. 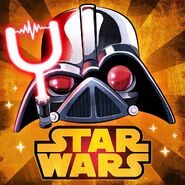 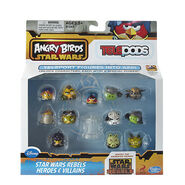 In Peru, Lima
Add a photo to this gallery