The opening of Angry Birds Starburst.

1 Level
Angry Birds Starburst is a web game with 1 level, advertising Starburst sweets. The game is loosely based off Angry Birds 2.

The game can be played here. The website is the game. In the start, Red will give his commands, and the game will start.

Afterwards, 3 Red cards are given to the player. If the player runs out of cards then the level will be failed.

The game has the classic Slingshot gameplay. To sling a bird, click the bird and drag the Slingshot's rubber to select its distance. Stop holding the bird to launch him.

If the player wins, their score will be ranked and they will be given 1, 2 or 3 stars depending on how well they did. An ad will pop up for Starburst regardless if the player wins or loses.

Starburst (originally known as Opal Fruits) is the brand name of a box-shaped, fruit-flavored soft taffy candy manufactured by The Wrigley Company, which today is a subsidiary of Mars, Incorporated, after Mars transferred the brand's production to it. Starburst has many different varieties, such as Tropical, Sour, FaveREDs, Watermelon, Very Berry, Superfruit, Summer Blast, and Original. The original flavours include: strawberry, lemon, orange, and cherry (changed from the initial lime). However, the UK original flavours are blackcurrant, lemon and lime, orange, and strawberry. The tropical flavours include: strawberry banana, pineapple, mango melon, cherry and kiwi. 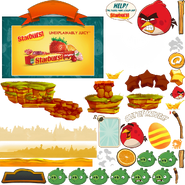 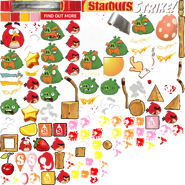 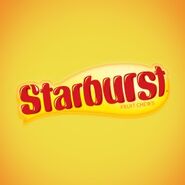 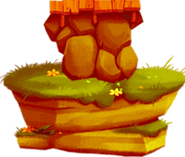