Angry Birds Telepizza was a web game that was released on May 25, 2012.

The game was linked at: http://telepizza.angrybirds.com/ Nowadays, however, due to the game being shut down, this link directs to Facebook's "Angry Birds Friends". 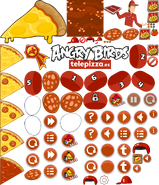