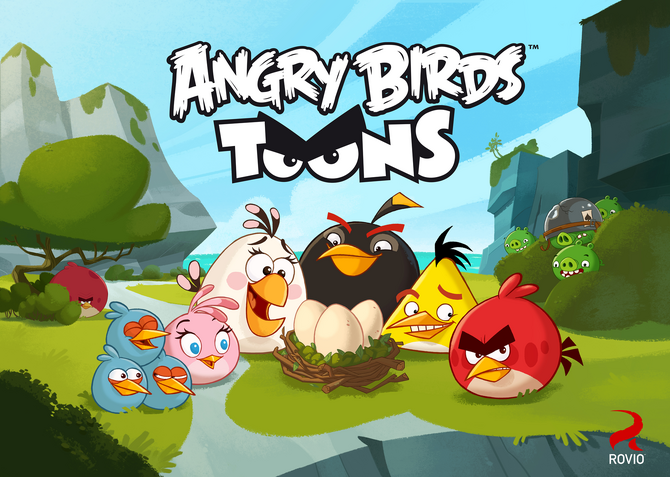 Angry Birds Toons is a Finnish cartoon comedy series that is based on the Angry Birds franchise. It premiered on March 16 & 17 and aired from March 16, 2013 to May 13, 2016. The DVDs are currently published by Sony Pictures Home Entertainment.

Nickelodeon has shown Angry Birds: Wreck The Halls, a Christmas special aired on December 17, 2011,[3] and Angry Birds Space, an animated prequel to the video game of the same name in March 2012.[4]

Rovio had announced a TV series based on the Angry Birds video games for Q4 2012. They planned to produce 52 short (sub-3 minute) episodes.[5] The series was produced by Finnish animation studio Kombo, which Rovio bought in June 2011.[6] The series will have 52 episodes, 4 seasons, and the theme song will be Angry Birds. "I am happy to say we are going to roll out a weekly animation series this year of short format content," said Nick Dorra, head of the animation at Rovio.[7] It aired on the Angry Birds apps on March 16 and 17, 2013. They also started to release the series on DVD and Blu-ray, starting with Season One Volume One in December 2013. Then in 2014, they announced a second season for the show on October 19. The season had 26 episodes, not like the 1st. Later in 2015, they announced a third season from the series on October 1st. The series was not been renewed for a fourth season and it's pretty unlikely it will have a fourth season.