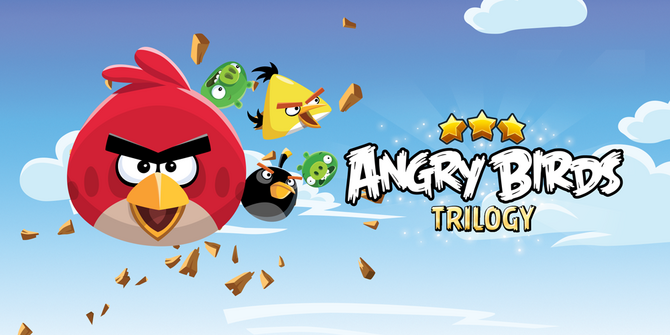 Aside from the backgrounds being changed in terms of animation, some other features were added to the backgrounds, such as Dandelions in Poached Eggs' first background. The birds' sprites have a thick outline, but they don't have smooth movement, they continue with their one-sprite expressions.

The game was officially announced on July 10, 2012 announcing more details about the gamd such as the pricing, the fact that it would support Microsoft Kinect on Xbox 360, PlayStation Move on PS3 and StreetPass on the 3DS, and more.[8] Rovio has said:

The 3DS, Xbox 360 and PS3 versions of Angry Birds Trilogy were the first to be released. The release date for the 3DS version was mistakenly October 2012 on Gamefaqs, but it actually was the same date as the other two versions on Gamestop.com.

In February 2013, Rovio Entertainment announced that the game got released on the Wii and Wii U later that year due to selling more than a million copies.[9] It released on those consoles on August 13, 2013.[10]

The game was released on PS Vita on October 15, 2013 which was similar to the 3DS version but with the DLC for free which were surprisingly never released on the 3DS.[11]

The game takes place in the isolated Piggy Island. A flock of rare multi-colored birds, led by Red and containing the Blues (Jay, Jake and Jim), Chuck, Bomb and Matilda, guarded a nest containing three eggs. However, from the distance watched the Bad Piggies, led by the greedy King Pig Smooth Cheeks. These pigs have been relegated to eat grass, and King Pig, who, unlike his ancestors, has never eaten eggs and needs to keep that fact a secret, has had enough. Meanwhile, Red witnessed a mosquito touch one of the eggs. Furious, Red tried to fight the mosquito, but it got away (though in the cinematic trailer, he managed to defeat it). King Pig saw his chance, and, along with other high-ranking pigs Corporal Pig and Foreman Pig, stole the eggs while Red wasn't looking. Red and his comrades spotted the empty nest, and screamed in shock. Red, along with Bomb and Matilda, mourned the loss of the eggs, while the Blues spotted footprints leading to the pigs, whom Chuck had spotted. Using a slingshot, the birds slung themselves towards structures made by Foreman Pig, and managed to defeat all three elites and get their eggs back.

Afterward, the multiple episodes show the pigs trying new ways to get the eggs. The birds meet more members of their species along the way (Hal and Terence), and the battle continues to places such as a forest, a desert, a mine, a beach, and more.

During a normal day on Piggy Island, the Angry Birds are taking care of the eggs as usual. However, they are suddenly caught by an helicopter and taken to a den in Rio de Janeiro, Brazil. The bird responsible of the kidnapping, Nigel, shows up and reveals that he had caught the Angry Birds to sell them in exchange of one hundred thousand dollars, as they were part of an "exceptionally rare species".[13] With this and seeing all the other caught birds, including two macaws called Blu and Jewel, the Angry Birds break themselves free from their cage and start to free all the other birds, including Blu and Jewel. It is in this moment when it is revealed that Blu and Jewel are united by handcuffs. Later, the flock, alongside Blu and Jewel, leave the den to go to a jungle nearby. Enraged, Nigel sends his Marmosets to go after them.

Making their way through the jungle and defeating all the Marmosets that try to stop them, the Angry Birds encounter Nigel, although they defeat him. Afterwards, the group is guided by Rafael to a beach on Rio de Janeiro. There, they find Luiz, who takes the handcuffs out of Blu and Jewel, separating them. Suddenly however, Jewel is kidnapped by Nigel, and the remaining birds go after her. Eventually, during a carnival, the Angry Birds find Jewel and other birds hidden under a chicken-like vehicle that is guarded by Mauro, who is defeated by the flock. Before Blu is able to free his friend however, he is caught by Nigel. With the caught birds, Nigel escapes with the vehicle as the Angry Birds go after them.

Eventually arriving at an airport, the Angry Birds free the caged birds and go aboard an airplane, where they free Blu and Jewel. Later, the flock has a final showdown against Nigel. After being defeated, Nigel tries to leave the plane as the freed birds leave. However, he crashes onto one of the plane's propeller, damaging it, and falls to the ocean. However, the Angry Birds manage to control the plane to go back to Piggy Island. There, Foreman Pig and a Minion Pig try to steal the eggs, though they leave in panic when they spot the plane. The Angry Birds leave unscratched, happy that the eggs are safe as the two pigs watch behind a bush.

Angry Birds Trilogy is a puzzle video game with the same gameplay to that from the first 3 Angry Birds games. In the game, the player takes control of a limited group of birds, who can be launched anywhere by the use of a slingshot. All levels have a series of enemies, who can be pigs in Angry Birds Classic and Angry Birds Seasons or either caged birds or Marmosets in Angry Birds Rio, the player must take down by the use of their characters. These enemies normally appear sheltered inside of structures made of wood, glass, and/or stone, in addition of some additional objects, such as chains and TNT. If the player fails to kill all the enemies in the levels, they will get a Level Failed screen, encouraging them to try again. If they manage to do so however, they will win and pass to the next level. Upon completing each level, the player will receive one, two, or three stars depending on the score received.

Contrary to popular belief, not all episodes are featured, however, more levels were added through DLC Packs.

However, the Mighty Eagle is included for no extra cost. The Mighty Dragon is also available when you purchase the Anger Management Pack. 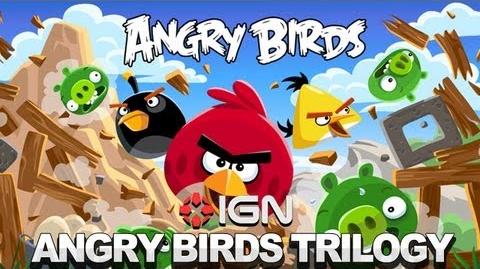 Classic theme/Main theme on most versions.

Seasons theme/Main theme on Wii and Wii U.